Sue is a Psychologist by profession, and was the founder of the first online therapy system in the UK.   Since retiring she has devoted a lot of her time to writing Historical Novels.   He first novel 'Tempest' - Bermuda 1609 is about the founding of the Island of Bermuda where she grew up.  She loves to research history and imagine what it was really like - and what better place to start than the founding of her childhood home.  Her second novel 'Peacemaker's Dream' continues the story and she is writing a third - so watch this space!

She now lives in Buckinghamshire, UK and is a Yoga Therapist teaching Yin Yoga and Chair Yoga.

She has a husband, three daughters, nine grandchildren, and a retired racing Greyhound.  Never a spare moment! 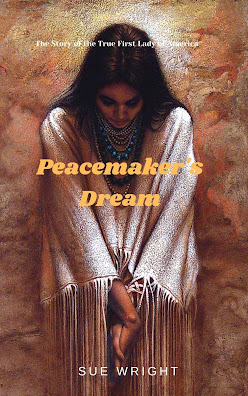 HISTORICAL ADVENTURE ROMANCE  THAT WILL GRIP YOU FROM BEGINNING TO END

She was gutsy and determined, but nothing could prepare her for the wrath of the invading Colonists.  Kidnapped, and forced to marry an enemy, her heart would always belong to her childhood sweetheart.

In captivity at the tender age of 19 she was grieving and broken hearted. The only glimmer of affection in her life was from the man she had been forced to marry. He loved her with an overwhelming passion.  Was she strong enough to survive in an emotional desert? Would loving another betray everything that she stood for?

Based on details previously only passed down by Native Americans, this book gives pause for thought about what really happened to the young Powhatan Princess who fought for peace with love in her heart.

He smiled as she looked up at him with big black eyes that were glistening with fear and anticipation. Her tiny naked flat chest was rising and falling as she waited, hoping that he could take from her the weight that had suddenly crashed down on her tiny shoulders. Hoping he would say it was alright and that she had misunderstood.

He sighed as he stooped down and lifted her up onto his knee and put his arm around her, drawing her into him. She felt his strong firm body and his still and calm presence, and sighed. This was her father; this was the strong warrior that she knew. He would make it better. She relaxed into him.

He looked down at her. "It is alright Pocahontas. The Spirits will always protect you and give you what you need. You are only a messenger.  It is not your message that we are waiting for - it is the message that will be given to you by the Manito Aki.  All you must do is open your heart.”

Pocahontas screwed up her face. "I do not really know what it all means, father. I don’t know how to open my heart. Say I am given a vision and I tell you the wrong thing?” Her mouth turned down and she sat up and stared into the fire, drawing her eyebrows together.

Powhatan pulled her back and gave her another hug. "Before you were born, it was prophesied that you would be a Beloved Woman whose Dream Visions would foretell the biggest changes in the world for hundreds of years. When the Spring Equinox is with us, you will go to a Hobbomak and you will stay there, not eating for many days. It is then that the Spirits will send you the vision.”

Their eyes met. Her face was long, and her eyes were watery, remembering what her Uncle had said.

“But father, I am only a child, I cannot do these things. I don’t know enough.”

"I know you will worry. It would be strange if you did not. All I can tell you Pocahontas, is that this is a process that has been going on for thousands of years. The spirits have said that you will be very special, and your name will be remembered for generations to come. There is nothing that you can do to stop this - the Spirits have spoken."

“But I don’t feel special, I just want to play and have fun. Can’t you choose someone else?”

Powhatan enveloped her in a bear like hug, smiling, but her body remained stiff, her eyes staring into the fire. She had known she had special powers for a long time. She saw things that others could not see. But she had ignored it, hoping it would go away.  She wanted to please him so much, but she feared telling him about the visions she had already seen, ...   She shivered, but not from the cold. She was beginning to realize that the nightmares that came to her day and night, were not just dreams, they were prophesies –  and silent  tears slid down her face as it became clear that Powhatan could not take it all away.