Happy winter solstice! Kylah McKinley, the heroine of my time travel romance thriller DARK BREW is a Druid. In the northern hemisphere, the Winter Solstice takes place today--Earth's northern hemisphere is tilted at its furthest point away from the Sun.

The Sun is at its lowest point in the sky, resulting in the shortest day and longest night.

According to Druid tradition, at the winter solstice, people in the village would bring a wooden log to the central fire, so everyone could take part in the celebrations. So the modern chocolate yule log might have its roots in more ancient traditions.

Who are the Druids?

Many people celebrate the Winter Solstice--the mid-winter sunrise and sunset-- coming to Stonehenge. Some people come from far away. However, it is the Druids, a group of Celtic pagans, who particularly celebrate the day when the Sun returns from its furthest point.

The Druids have celebrated the return of the Sun for centuries. Their celebrations bring awe and mystery to others who gather at Stonehenge for the Winter Solstice as well. 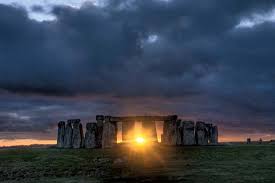 English writer John Aubrey wrote in the 17th century about the probability that stone circles, such as Stonehenge, were Temples of the Druids. He called his text on stone circles the Templa Druidum. The first Druids were pre-Celtic inhabitants of Britain.

Druids, who value peace, nature, and harmony, make a pilgrimage twice a year to gather at Stonehenge to celebrate the Summer and Winter Solstices. Druids are a group of Celtic pagans who have adopted the historical site as part of their history.

The great prehistoric tomb at New Grange in Ireland and the great cairn at Maes Howe in Orkney are also orientated on the Winter Solstice and they, too, receive Druids for the mid-winter celebrations.

DARK BREW is in print, on Kindle, and on audio with the expressive Nina Price, who rocks an Irish brogue.

Posted by Diana Rubino at 8:50 AM No comments:

A Tradition of Christmas Past: Spaghetti Aglio e Olio Recipe, and My Italian Heroine, Based on my Great Grandmother

My great grandmother (Grandma to everyone) was the matriarch of the family, the mother of my grandfather. “Josie Red” as she was known in downtown Jersey City was way ahead of her time, as a bootlegger during Prohibition, a real estate tycoon, a small-time loan shark, and according to legend, Mayor Hague’s mistress.

Every Christmas Eve, her daughter, my great aunt Lucretia, a gourmet cook, invited everyone to her basement for an Italian feast. Grandma’s four children were grown with children and grandchildren of their own. Of course this necessitated a ‘kiddie table’ at which I sat until I was tall enough to sit with the grown-ups. Aunt Lucretia always made two types of spaghetti sauce—regular marinara sauce and aglio e olio—but what I remember is it always contained clam sauce, which I wouldn’t touch, so I went for the plain and safe marinara. Her finished basement had a small kitchen so she was able to do all the cooking right there. Kiddies weren’t allowed to, but several adults helped her carry the steaming plates to the long tables set up and covered with holiday-themed tablecloths. She served all the traditional Italian dishes—after the pasta came the ham, then the fruit and nuts, and of course, an array of desserts, always including her famous struffoli (honey balls) and Italian rum cake. My Uncle Eddie tended bar at the other end of the room.

Vita Caputo, the heroine of my 1894 New York City romance FROM HERE TO FOURTEENTH STREET, is based on my great grandmother. It’s now on audio with the expressive animated New York native Nina Price. 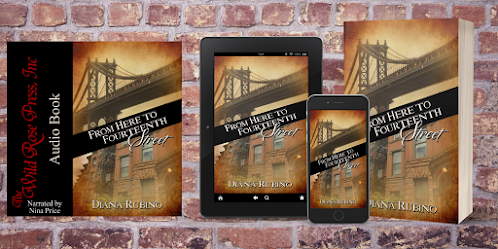