It's titled LIFE and now I have a new respect for Keith as the genius that he is.
He says this to musicians, but it's something all writers should remember:
"Already five years earlier, on Some Girls, we'd got "Miss You" out of it, which was one of the best disco records of all time. But Mick was chasing musical fashion. I had a lot of problems with him tryng to second-guess the audience. This is what they're into this year. Yeah, what about next year, pal? You just become one of the crowd. Let's just do it the way we've always done it, which is do we like it? Does it pass our test? When it comes down to it, Mick and I wrote our first song in a kitchen. That's as big as the world is. If we'd been thinking about how the public was going to react, we'd never have made a record."
Posted by Diana Rubino at 7:15 AM 1 comment:

Had a blast at Nationals! So good to see everyone! Worked registration & met one of my fav authors, Tess Gerritsen. Photo from the 48th fl. revolving restaurant atop the Marriott Marquis. 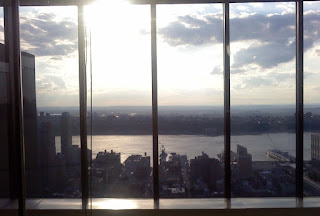 Posted by Diana Rubino at 1:23 PM No comments: