Meet My Friend Alois Lohn, at 87 Still Writing, and Read About His Newest Book

Al was born in 1934 on the outskirts of Cologne Germany and educated in the art of apparel manufacturing. He worked until 1956 in his father's business. In November 1956, he immigrated to the USA with his parents and younger brother. Drafted thirteen months later, he served in the US Army for two years, two years in the Army Reserve, and two years on stand- by. While stationed in Germany he met his wife. After his discharge from the Army, he became the manager of Brooks-Van Horn's manufacturing department in Philadelphia, a Theatrical costume company serving the entertainment industry. During his ten year-tenure, he worked on many challenging projects such as 'Holiday on Ice', 'Hello Dolly', the Philadelphia Mummers, historical reproductions for the Marine Corps, the Smithsonian Institute, and wax museums. During his fifty-year career, he served as Corporate Senior Vice President for Liz Claiborne Inc and retired as Corporate Vice President from the Spiegel Group in 1998. His extensive travel during his 50-year career took him around the world to all five continents. His travels gained him a deep understanding of the world's cultures as well as their trials and tribulations. This, combined with his experience growing up in a war-torn country during World War II, and his military service, compelled him to turn to writing after his retirement. He resides in New Jersey with his wife of fifty-seven years were they enjoy their children and three grandchildren. Now he writes and is the author of several published books. 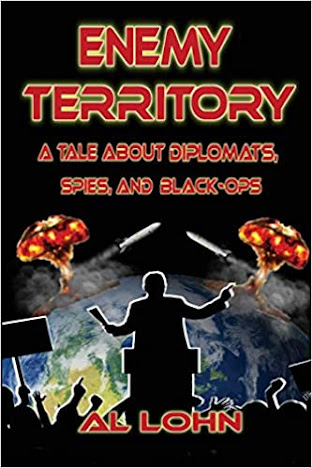 President Tanner of the USA forms a team to investigate the conspiracies of a confederation of totalitarian governments, set to change the world order and become the global rulers.

The president's team consist of the secretary of state, the CIA, FDI, and the military. He picks the CIA deputy director, Captain McDonald, a former Seal Commander as the planner, organizer, and executer of the final mission to destabilize the frightful alliance.

Alicia is a fellow Wild Rose Press author, and she's been my blog guest many times. Enjoy reading about her Valentine's Day story Cupid's Beau!

Other than reading and writing, her passions are Elvis Presley (she almost always works in a mention of him into her stories) and watching (and rewatching) her favorite televisions shows like Ozark, Dexter, Justified, Breaking Bad, Sons of Anarchy, and Vampire Diaries. Some of her favorite authors are Michael Connelly, Dennis Lehane, Stephen King, Lee Child, Lisa Gardner, Ridley Pearson, Joseph Finder, and Jonathan Kellerman…to name a few.

I love to create fictional locations for my stories, and I always try to attach some kind of meaning to them. For Cupid’s Beau, I set it in Wisconsin because I wanted it to be a wintry setting and because my favorite NFL team is the Packers. For the name of the town I chose Castleville. It’s a play on Castle Rock, from Stephen King novels, and a town I lived in as a child for a brief, idyllic time, Cassville, Missouri. (Technically, we didn’t really ‘live’ in Cassville. We lived in some odd Bermuda triangle type location that was a mash up of Exeter, Washburn and Cassville, but we attended Cassville schools, so that’s what I went with 😊) 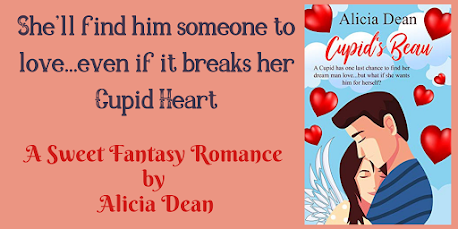 Ivy Pierce is a Cupid who prides herself on doing her job well. Except when it comes to a certain human male, Grant Crawford. Each time she's supposed to shoot her arrow into his heart, her stomach hurts, her chest hurts, and she feels….sad. Cupids are never sad.

Humans who are not looking for love only get three chances to find it. And after Ivy sabotages Grant's last chance, her boss, Aphrodite, sends her to earth to right her wrong. She has until Valentine's Day to help him find his soul mate.

But the more she's around him, the more she wants him for herself, even though she knows that can never be. A Cupid and a human? Unheard of.

As V-Day draws closer, can she sacrifice her own happiness to help the man she loves find his? 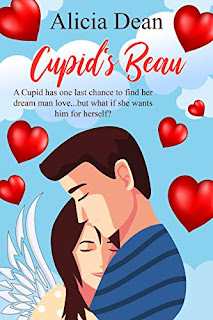 He helped Gretchen into her coat and walked her to her car. She hesitated before climbing inside the door he held open. Did she expect a goodnight kiss? Snow had started, and he wanted to get back in, so he leaned forward. She lifted her lips, and he gave them a quick kiss. "Goodnight, Gretchen. I had a nice time."

Her expression showed disappointment, but she didn’t voice it. She slid in the driver’s seat. He closed the door and watched while she backed out of the parking spot and headed down the road.

Before going in, he glanced down the street. A woman was outside a small cottage half a block away. Was that Ivy? What was she doing outside, in the dark, with a blizzard brewing?

None of his business. He turned toward the restaurant, but didn’t go in. What if something was wrong? If she was hurt? How would he feel if he didn’t at least go check on her? Cursing under his breath, he whirled and stalked down the sidewalk to her house.

“Ivy? What are you doing out here?”

She turned to him, her eyes wide. She wore a white coat with a fur hood framing her face. “Grant! Hi. Isn’t it beautiful?”

He blew into his hands and rubbed them briskly together. “It’s freezing. Are you out of your mind?”

She closed her eyes and stuck out her tongue, trapping a snowflake and swallowing. She looked at him. “You try it. It’s wonderful.”

He nearly groaned with irritation. “I don’t have time—”

She took his hand, her soft, gloveless skin warm on his. “Just try it.”

Letting out a heavy sigh, he groaned again. The sooner he acquiesced, the sooner he could leave. He stuck out his tongue. Icy snowflakes drifted into his mouth. Nope. He still didn’t get it.

She squealed. “Wasn’t it great?”

Her green eyes sparkled, the pink in her cheeks making her look…heart stoppingly lovely.

He hadn’t seen anyone show such pure joy in…well, ever. Especially in something so insignificant. He looked up into the sky. Snow drifted down from the blanket of blackness. The Heavens dumping an icy wonderland on Earth. Nature was amazing. While he didn’t exactly share Ivy’s enthusiasm, maybe it wasn’t so insignificant after all.