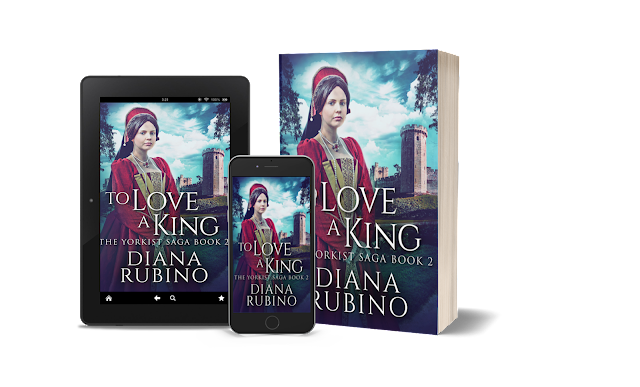 About TO LOVE A KING

While embroiled in the intrigue and scheming of court, King Henry the Eighth meets the love of his life—and it’s not Anne Boleyn.

Henry VIII had six wives and many more mistresses, but Amethyst of Warwick was the love of his life. So why didn’t he ever marry her? He was either married, or she was married—to a despicable old wretch he foisted upon her as a punishment.

Amethyst’s sister Topaz is a spitfire who makes his life a living hell, only because she’s trying to seize his throne. She has a credible reason—Henry’s father killed her father, a rightful heir to the throne, to get him out of the way. As the Jewels grew up without their father, Topaz mourned his wasted life. Now she wants what’s rightfully hers.

Until the night Henry dies in her arms, she is torn between her love for him and for her sister. Amethyst’s devotion to Henry creates a painful rift between the sisters that remains unresolved until the story’s end. While Amethyst lives a comfortable but troublesome life at court as the king's mistress, Topaz raises an army and goes into battle with the king. Forced to defend his crown, he imprisons Topaz for treason. Amethyst begs the king to release her, but he dies while she's still imprisoned.
Henry's heir, young King Edward, sets Topaz free, but banishes her to the New World. She embarks on a voyage with explorer Sebastian Cabot, hoping to colonize her own monarch‑free realm, in what will someday be New England.

"I must marry Anne.” He spoke so low she could barely hear him. “She believes she is with child."
“Oh, no.” Amethyst shook her head. King Henry’s gemstones flew from side to side in a dazzling blur. “No...no, it can't be...Anne Boleyn is a liar!” She grabbed his arms and shook him, abandoning all protocol, all etiquette, all manners. “Why must you marry her? You bedded her and after making me wait all this time, now you are going to turn round and marry her?”
Henry jerked out of her grasp. “You ran away, you silly wench. What was I to do, live like a monk, the way Catherine wants?” He took a few paces to the table and picked up a goblet. “The only reason I turned to her was because you'd left, without so much as a word.” He took a long pull of the ale and replaced the goblet with a thunk. “I do not love Anne. She is merely a breeding mare, more than willing to give me an heir, which you did not have the patience to stay around and do.” His eyes narrowed at her. “My divorce is finally in sight, you know how badly I need an heir, and you couldn't wait another few months.” He swept his hand through the air. “No, you had to come running back to home and hearth, back to the castle, expecting me to come back to you, begging on bended knee. A king does not beg.” His eyes narrowed to beady slits. “I have come to tell you I want you to return to court. I am admitting what you so desperately want me to admit. I want you back there with me. That is why I journeyed here. To bring you back.”
Her wish, her prayer, now answered after all this time…but now it hit her like an insult. “To play second fiddle to the night crow? After you asked me to be your queen? What kind of fool do you take me for? You no longer love me.” She placed a fist on her hip. You want me under your thumb so you can keep me as a spare for when Anne gets too swollen and ugly for you to bed.” She turned away, unable to look at him.
“Holy Jesu, Amethyst, would I have left court and the future mother of my heir if I did not love you?”
“At this point I don’t know what to believe.” Her fists now clenched before her, she wished she could strangle that harlot he’d bedded.
“How dare you refuse me.” Henry strode to the door and flung it open. “I shall give you until tomorrow, when my retinue and I leave. If you have not agreed to come back with me, do not ever return to court again.”
At the door he dismissed her with the same wave of his arm befitting his servants. She left, not in obedience to him, but because she no longer wanted to see his face. The thought of him bedding Anne Boleyn sickened her.

Purchase TO LOVE A KING on Amazon