My blog guest today is Kara O'Neal, who recently hosted me on her blog. Meet Kara and read about her Western romance THE SHERIFF'S GIFT. The Pike's Run series is Texas romance that will touch your heart and give you hope.

Born and raised in Texas, the state had to be the setting for my first series. From the food to the fun, like floating the rivers, it is the fire in my blood that inspires me. My family and friends take center stage in my books. My sisters and best friends are my heroines, and my husband created my favorite hero. Love and family are the point of my stories, and I seek to entertain, relieve stress, and inspire people. Books can take one on a journey that one can relive over and over. I am extremely grateful to those authors who did that very thing for me. I learned and I fell in love with their words and characters. From the bottom of my heart, thank you. To get all my book news, sign up for my newsletter Love and Lone Stars!

About THE SHERIFF'S GIFT 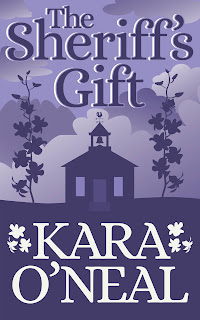 Strong-willed and independent, Alice Parker is certain she’s meant to be a school teacher. She accepts her first position in Pikes Run, ready to mold the minds of young children, but unprepared to deal with her attraction to Sheriff Conner Lonnigan. If the board finds out she’s tumbled into his embrace more than once, she would be fired.

Sheriff Conner Lonnigan is awed by Alice Parker. He falls for her almost immediately, but the demands at home forbid him from marrying. Conner’s duties as sheriff control his days, and his mother’s panic attacks control his nights. He doesn’t have the freedom to devote himself to Alice, but that can’t stop him from pursuing her anyway.

Alice and Conner fight their love for each other, but the wants of the heart become too much to ignore. As they battle the demands of their jobs, the couple finds that ultimate fulfillment can only be found in each other's arms.

He didn’t reply until she was outside. “I have somethin’ for you.”

She gave him a sideways glance. “I hope it isn’t another complaint from Beulah.”

He grinned down at her. “Nope.” He jerked his head in the direction of the yard. “Come on.”

She followed him into the yard and toward the barn. When they entered the building, the cows lowing and the horses swishing their tails, he stopped and pulled her into an empty stall.

They were alone except for the animals. This was what she’d tried to avoid, and here she was, despite her usual unflinching self-control, in the wrong situation. Though her heart exalted, her mind raced for ways to get this over with quickly.

He smiled down at her, his hand still at her elbow from when he’d pulled her over. “You look pretty today.”

“Only today?” she heard herself ask. Oh, dear! She was flirting.

He chuckled low and deep. “Every day. You’re always pretty.”

In her wildest dreams, she’d never thought to hear a man say such a thing. “What did you want to show me?”

He flushed beneath his confident smile. “A present. I ordered it for you.”

Alice’s heart stopped then sped like a locomotive. “Truly?” she whispered.

“But…but I didn’t get you anything,” she protested.

His smile turned soft, and her knees went to jelly. “Just havin’ you here is present enough.”

If he said anything else as tender and beautiful, she might faint from want of him. “Oh,” she murmured.

He gazed at her for a few moments more before reaching into his coat and pulling out a box wrapped in brown paper. He handed it to her.

Gingerly, she took it and unwrapped it slowly, wanting to savor the moment. Once the paper was gone, she sprung the latch on the box and lifted the lid. Her throat ached with emotion when she saw what sat in the velvet casing.

A small ceramic house, the rooftop covered in snow, stared up at her. It was beautiful. She ran a finger over its smoothness. “Thank you,” she rasped.

“There’s more.” He took it from her and lifted it out of its case. “It’s open in the back. You can put a candle here and since the windows are cut out, it’ll look like there’s—”

“Firelight,” she breathed. Awed and deeply touched, she gazed up at him. He’d remembered her memory of her mother and bought her a gift to commemorate the time. “Oh, Conner. How wonderful.”

She closed her eyes in disbelief then opened them once more to look up into his handsome, dear face. “I adore it.”

And in that moment, everything she’d ever wanted changed forever. She loved Conner Lonnigan with all her heart. The emotion stampeded through her, causing her to tremble with its force. She couldn’t stop herself from rising up and taking his lips with hers.