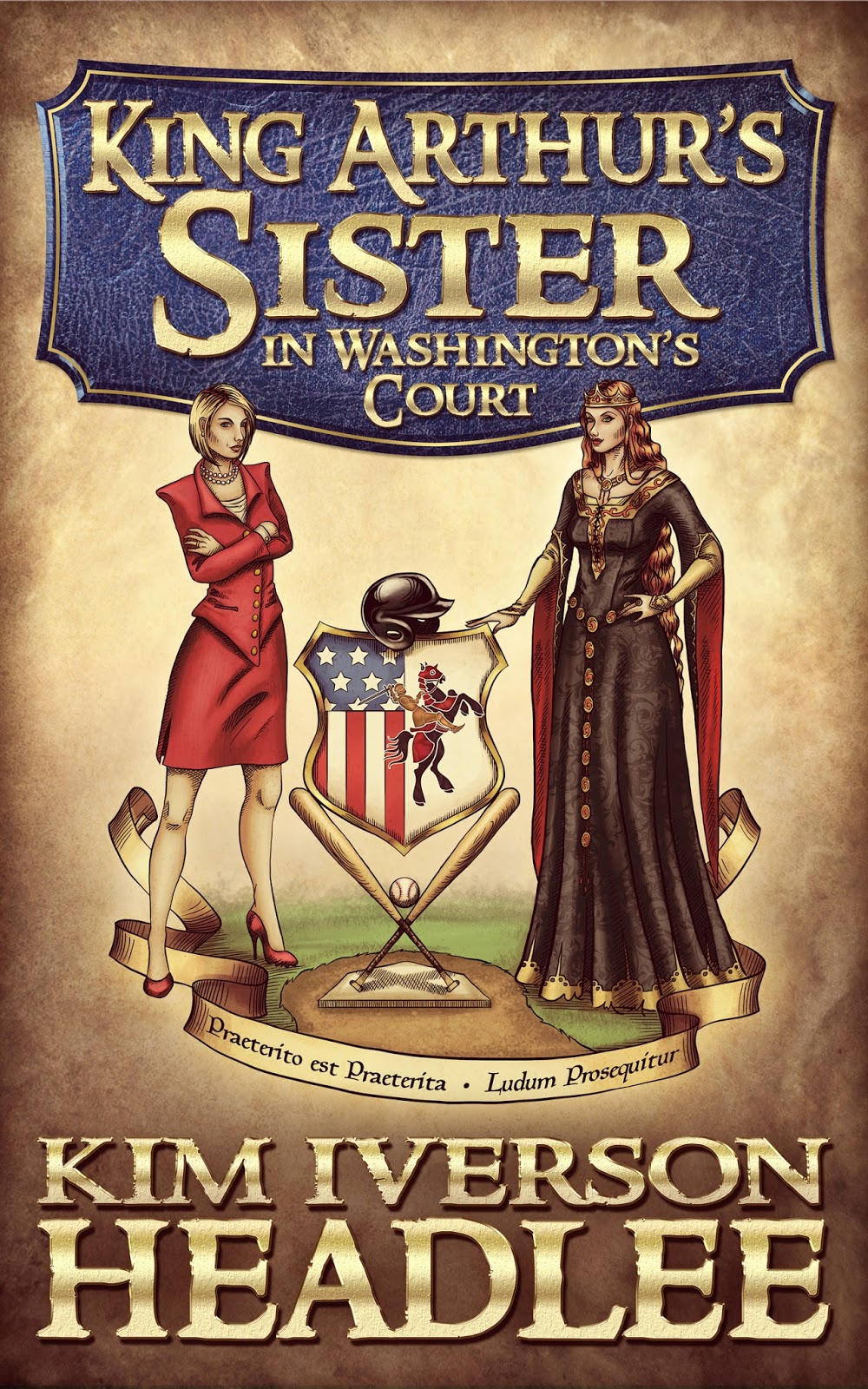 SYNOPSIS
Morgan le Fay, 6th-century Queen of Gore and the only major character not killed off by Mark Twain in A Connecticut Yankee in King Arthur’s Court, vows revenge upon the Yankee Hank Morgan. She casts a spell to take her to 1879 Connecticut so she may waylay Sir Boss before he can travel back in time to destroy her world. But the spell misses by 300 miles and 200 years, landing her in the Washington, D.C., of 2079, replete with flying limousines, hovering office buildings, virtual-reality television, and sundry other technological marvels.


Whatever is a time-displaced queen of magic and minions to do? Why, rebuild her kingdom, of course—two kingdoms, in fact: as Campaign Boss for the reelection of American President Malory Beckham Hinton, and as owner of the London Knights world-champion baseball franchise.

Written as though by the old master himself, King Arthur’s Sister in Washington’s Court by Mark Twain as channeled by Kim Iverson Headlee offers laughs, love, and a candid look at American society, popular culture, politics, baseball...and the human heart.

Chapter XI: The Queen in Search of a Baseball Club
CLARICE HELPED ME pack my clothing and accessories for the relocation to London: just what I would need for the first brace of weeks, which amounted to eight large traveling cases, one of which was devoted to my hair accoutrements and cosmetics. Not long after arriving in this century, Clarice had introduced me to these wonderful products, which allowed me to create the same visual effect as I had done for decades with the aid of magic; now you sit privy to the secret of how I could cast ever so many enchantments for President Malory and remain looking as glorious as ever.
While I was yet sorting through my garments deciding which to bring and which to leave, my thoughts turned toward a leaving of another sort. I must have appeared sorrowful, for of a sudden Clarice asked if aught ailed me.
“I shall miss you, Clarice, when I get to London.” Since that answer represented only half the truth, I hurried on with: “And yet I know that you shall perform your duties in continuing to oversee my office here in Washington to the utmost of your considerable abilities.”
That made her smile, and she thanked me for the compliment, but her look turned shrewd. “I imagine you’ll miss President Hinton, too.”
“Of course I shall. She has become as a sister to me.”
I resumed examination of the dress I had been holding, a sexy little black thing that I would have loved to have worn only for Accolon…
“Please tell me about him,” said Clarice.
“I beg your pardon?”
The shrewd look was back. Mayhap it had never left. “Sir Accolon. Queen Morgan, you have not—um, partnered with any man of this century more often than once to my certain knowledge, since I manage your schedule. I suspect that you have not yet found anyone you like, let alone love, as well as he. No one of this era could make you go all moony-eyed while looking at a dress; therefore, you must be thinking about Accolon. So, please tell me about him.”
Ha. I knew I had chosen her as my trusted adviser for good reason, and I rewarded her accordingly. As the memories swirled about in my mind, making me yearn even more acutely for Accolon’s company, I said:
“He was a knight with very few peers during his lifetime, excepting only Sir Launcelot and Sir Gawaine. And my brother—those three were the only knights who ever bested him in single combat. So naturally, he was big—in all parts and portions—and muscular, and very strong, yet as a lover he was no brute, but as tender as any virgin maid could ever wish for. His intellect was nearly as keen as mine, as was his eagerness to assist me in righting the wrongs inflicted upon me by my brother. He had hair as glossy black as a raven’s wing, which he kept short-cropped in the old Roman style; he once said it was more comfortable under the helmet than having masses of hair stuffed up under and making the head sweat overmuch. It had a fine curl to it that I found most endearing. His eyes were an unforgettable shade of blue, and he had a strong chin that he kept clean-shaven…Lord God in heaven! Who on earth is that?”

While I had been discoursing on Accolon’s virtues, Clarice had activated her screen, which was now displaying the image of a man who could have been my dead lover’s twin.
Clarice grinned. “You said the other day that you wanted to find another general manager for the Knights. This man is Alexander Leroy ‘Sandy’ Carter, former WBF second baseman and 2073 Tournament MVP for the Connecticut Yankees. Since his retirement as a player, he has served in various capacities for several teams, including as a GM. He is a renowned expert in all matters baseball.”
In any era, when something—or someone—sounds too good to be true, it—or he—usually is. I asked, “If he is so valuable, then why does he not stay with one team?”
A look of chagrin crossed her countenance. “Sandy Carter is what we call a ‘loose cannon.’ He can be temperamental and wild, and he gets into fights with players and coaches and…sometimes even with his bosses. And not just verbal fights, either. Usually his points are quite valid, but his means of expressing them don’t earn him any friends.”
In a word, then, passionate. Passionate men I understood and could work with. It had been thus with Accolon at the start of our association, and look at all I had been able to accomplish with him. Everything I had ever desired, except King Arthur’s throne.
Wit I well that lying and gullibility were two facets of human nature that had not changed in the last fifteen centuries and shall not change in the next fifteen, either. I had learned this while trying to evaluate potential new Knights for the team. Everyone speaks glowingly of his accomplishments and accolades; no one ever mentions his flaws or mistakes or regrets unless a wise employer chooses to ask specific questions of this ilk. Yet Clarice had offered the bad along with the good of this man. Still, I would be forced as a point of honor to relinquish my coveted title of The Wise if I accepted her words at face value; upon turning the thought-receptors toward me, I soon verified everything she had told me about this volatile man.
I asked, “Is Sandy Carter available now?”
Clarice’s grin returned. “For the right price, Queen Morgan, anyone is.”
It took only one call, and Sandy Carter expressed exceeding pleasure and eagerness to accompany me to London as general manager of the Knights. The fact that I had worn the sexy black number during the call saved the team quite a sum with regard to Carter’s agreed-upon salary.
Neither as queen nor as ball club owner do I ever make idle promises.

For more chances to win, you are invited to...
— Follow Kim on Twitter
— Add Kim to Google+
— Subscribe to Kim's YouTube channel
— Leave a comment on any page of Kim's blog The Maze, especially if you have done the Twitter and/or
YouTube follow
...and each action this month is good for one chance to win an e-book copy of King Arthur's Sister in Washington's Court. Please enter often, and good luck!
Posted by Diana Rubino at 12:00 AM 2 comments: