I've been a huge Lincoln buff since childhood, and it was a joy to write my own novel about Booth's insane plot to assassinate him (A NECESSARY END). I read every Lincoln book--fiction and nonfiction--I can find. When I saw a post about Sam's book on one of my Facebook author groups, I snapped it up and read it immediately. After thoroughly enjoying it, I gave it a glowing review on Amazon (below). 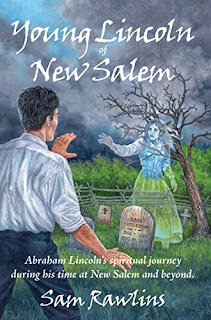 In Sam's Own Words

In all my years of researching Lincoln’s life for my book, Young Lincoln of New Salem, I have found what he lost in life was worth saving in his memories. This was something he learned time and again throughout his life.

In the many first hand accounts I have reviewed over several decades, one important personal trait he never lost. He never let go of his deep, emotional feelings for friends and beliefs he treasured.

He kept all that he cherished locked inside his heart and soul. To those he shared his feelings and beliefs with, he was a man of great courage and compassion. The fact that he never let go of memories of those he loved and cherished is reflected in countless photos that reveals the grief concerning them. Such deep, heartfelt feelings were all a part of the sadness that never left his face.

In some ways it was these emotions that filled his most sincere beliefs and contributed to the great man Abraham Lincoln became. He drew to embrace all that was inside him to become one of the greatest presidents and one of the greatest Americans who ever lived.

He left both a legacy and a shining example of what can be accomplished against all odds if one comes to believe in oneself. In writing my own book about Abraham Lincoln I became deeply humbled by this man’s shining example to others. I will always admire him.

On the coming occasion of the 211th anniversary of his birth on February 12th I would encourage everyone to learn more about the life of this great human being.

My Review of YOUNG LINCOLN OF NEW SALEM:

5.0 out of 5 stars Lincoln’s Early Life That We Never Learned About in School
Reviewed in the United States on January 17, 2020

Format: Kindle EditionVerified Purchase
I’ve been a huge Lincoln buff since childhood and have read many of the
thousands of books about him, all of which go no farther back than his
career as a lawyer in Springfield, and his tragic romance with Ann Rutledge.
They all mention his birth in a log cabin, of course. But Mr. Rawlins dug
deep—and you’ll see at the end of the book how many sources he
probed—to research Lincoln’s early life—that log cabin birth in Kentucky,
his formative years during which he was brutally abused by his father,
his and his sister’s starving after his mother’s death during his father’s
many absences, his stints as a store clerk, postmaster, term in the
Illinois State Assembly, service as a captain in the Illinois Militia, four
terms in the Illinois House of Representatives, and flatboat trips to
New Orleans, where he witnessed the brutal treatment of slaves. He
fell deeply in love with Ann Rutledge, and she died soon after they became
engaged. He suffered a deep depression and friends prevented him
from committing suicide. This ‘melancholy’ never left him, as Ann
was the love of his life. His grief consumed him through his courtship
and marriage to Mary Todd. We learn of the extreme poverty he suffered
as a child and how he overcame it to learn the law from reading law
books, becoming a successful lawyer. The book then goes over the
later parts of his life; his marriage, law career in Springfield, presidency,
family, and assassination. Up to now, we know who Lincoln was, but not
what made him who he was. I highly recommend it.