Interview with David Pilling, Author of WHITE HAWK, his newest novel set during the Wars of the Roses

Welsh author David Pilling is on board today for an extensive interview.
THE WHITE HAWK is now on sale at Amazon in print and Kindle versions. Click on the link below to purchase.


Meet David and check out his latest, set during the Wars of the Roses. 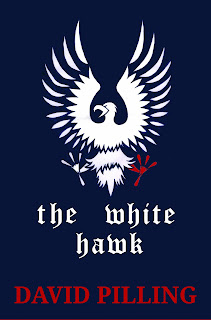 
The letters provide us with a snapshot of the trials endured by middle-ranking families like the Pastons, and of the measures they took to defend their property from greedy neighbours. One such extract is a frantic plea from the matriarch of the clan, Margaret Paston, begging her son John to return from :


"I greet you well, letting you know that your brother and his fellowship stand in great jeopardy at Caister... Daubney and Berney are dead and others badly hurt, and gunpowder and arrows are lacking. The place is badly broken down by the guns of the other party, so that unless they have hasty help, they are likely to lose both their lives and the place, which will be the greatest rebuke to you that ever came to any gentleman. For every man in this country marvels greatly that you suffer them to be for so long in great jeopardy without help or other remedy..."


The Paston Letters, together with my general fascination for the era, were the inspiration for The White Hawk. Planned as a series of three novels, TWH will follow the fortunes of a fictional Staffordshire family, the Boltons, from the beginning to the very end of The Wars of the Roses. Unquenchably loyal to the House of Lancaster, their loyalty will have dire consequences for them as law and order breaks down and the kingdom slides into civil war. The ‘white hawk’ of the title is the sigil of the Boltons, and will fly over many a blood-stained battlefield.


In the following excerpt, one of the protagonists is introduced to his first taste of real combat at the Battle of Northampton:


“The Lancastrians still had their archers, and the unseasonal rain had turned the ground between the two armies into a quagmire. Geoffrey lost a shoe in the soft, sucking mud, and cursed as he was forced to hobble onward with one naked foot.


Then the skies darkened, and the man beside him squealed and went down with an arrow protruding from the eye-piece of his sallet. Geoffrey lowered his head and stumbled on, gagging at the stench of excrement and split gut that filled his nostrils as more arrows strafed Fauconberg’s division, cutting men down and breaking up their carefully ordered ranks.


Geoffrey was breathing hard, his limbs seized with weariness as he laboured through the mud. His heart rattled like a drum. The Yorkists were being murdered by the arrows, and still had to cross a deep ditch, defended by a wall of stakes and thousands of determined, well-fed and rested Lancastrian infantry. They would surely be repelled, panic would set in, and men would start to run. Then the Lancastrian knights would mount their destriers, and the real killing would begin as they pursued their beaten foes across miles of open ground.


Geoffrey’s courage and desire for vengeance shriveled inside him. He desperately wanted to turn and run, but the press of men forced him on, towards the bristling line of stakes. He glanced ahead, and saw that March’s division had stormed right up to the barricades on the right flank of the Lancastrian position. These were defended by men wearing badges displaying a black ragged staff. He recognised the livery as that of Lord Grey of Ruthin, a powerful Welsh Marcher lord.


He expected March’s advance to grind to a halt as his men came up against the stakes and Grey’s well-armed infantry, but then something extraordinary happened. The men wearing the badge of the ragged staff laid down their weapons and stood aside, allowing the Yorkists to pass through their lines. Some even stooped to help their supposed enemies over the ditch.


Lord Grey had turned traitor. Geoffrey had no idea why or how it had been arranged, being too unimportant to be made privy to such deals, but his heart sang at the result. That one act of treachery would surely reverse the tide of battle. The Lancastrians were doomed, trapped like rats inside their improvised fortress. More to the point, Geoffrey’s chances of survival had just improved dramatically…”


Any new projects, work in progress?
My next book, “Nowhere Was There Peace”, a tale set in 13th century , is due to be published by Fireship Press. “The Gelded Wolf”, the latest mini-sequel to “The Best Weapon” (the fantasy novel I co-wrote with my good friend Martin Bolton) will be available on the 21st of December.