I met Ken when I joined his Facebook group Writers Roundup. Read about Ken's amazing life and Book 3 of his award-winning Three Creeks series. 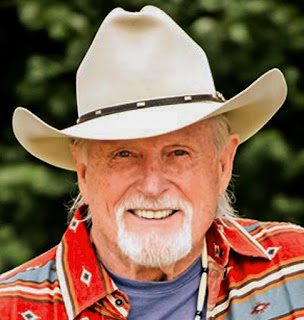 Ken didn't write his first full novel until he was sixty-nine years of age. He often wonders what the hell took him so long. At age seventy-nine…he's currently working on novel number forty.

Ken spent thirty years raising cattle and quarter horses in Texas and forty-five years as a professional actor (after a stint in the Marine Corps). Those years gave him a background for storytelling…or as he has been known to say, "I've always been a bit of a bull---t artist, so writing novels kind of came naturally once it occurred to me I could put my stories down on paper."

His writing style has been likened to a combination of Louis L'Amour and Terry C. Johnston with an occasional Hitchcockian twist…now that's a combination. Ken just likes to say, "I'm a storyteller."

Novel #36 was SKINWALKER JUSTICE, a Western Supernatural thriller, book #5 in the Silke Justice series.  STEELDUST, started the BONE & LORAINE spin-off with modern day detectives, Bone and Loraine being accidentally transported back in time to 1898. Current WIPS are #39, DALIA MARRH, book # 6 in the Silke Justice series and FRIENDS, book #4 in the THREE CREEKS MYSTERY SERIES.

Writing has become Ken's second life: he has been a Marine, played collegiate football, been a Texas wildcatter, cattle and horse rancher, professional film and TV actor and now...a novelist. Who knew?

In addition to his love for writing fiction, he taught acting for 17 years, still teaches voice-over and creative writing workshops. His favorite expression is: "Just tell the damn story."

"Ken is a magnificent writer. I enjoy everything he writes whether it is about the old west, southern noir mysteries, or about the modern Black Eagle Force. - Israel Drazin TOP 1000 REVIEWER & VINE VOICE. 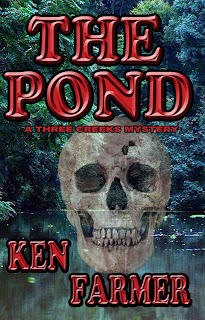 Best friends Foot and Hutch discover a 35 year old skull while swimming in Uncle Dud's pond in the woods...there are more.

Two thirty-five year old murders…High stakes game of murder...What do historical artifacts have to do with it?

Foot and Hutch discover the skeletons in a spring-fed pond, deep in the piney woods of southern Arkansas—each with two bullet holes in their foreheads, in 1950. Who were they?

Foot's favorite cousin, Francis Ann, comes from Texas to visit. He calls her 'Red' because of her long flaming red hair. She, Foot and Hutch are all the same age.

Who is Motshan Bieler and why are members of the new Nazi party from Argentina determined to find him?

What is he hiding?

Does their friend, WWI Marine Corps Medal of Honor recipient, Tom Rayford, come to their aid? Only time will tell.

Find out in the third thrilling addition to Three Creeks, the Southern Noir Mystery series,…THE POND when all the pieces come together.

Purchase THE POND on Amazon