Do You Remember Where You Were 25 Years Ago Today?

Thousands of readers have been captivated by the books of Stacy Juba. Stacy published her first book, a young adult novel, at age 18 and she hasn't stopped writing since. She has authored books for adults, teenagers and children. Stacy has written about high school hockey players, reality TV contestants targeted by a killer, an obit writer who solves a cold case, teen psychics who control minds, teddy bears learning to raise the U.S. flag, and lots more. Her other titles include Sink or Swim for adults; Dark Before Dawn and Face-Off for young adults; and The Flag Keeper and the Teddy Bear Town Children's Bundle for children. 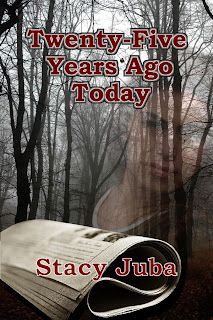 Should we dig for the truth when Pandora’s Box is a coffin of buried secrets?

Kris Langley has always been obsessed with murder. She blames herself for the violent death of her cousin when they were kids and has let guilt invade every corner of her existence. Now an editorial assistant and obit writer, Kris stumbles across an unsolved murder while compiling “25 Years Ago Today” items from the microfilm. Determined to solve the case and atone for the death of her cousin, Kris immerses herself in the mystery of what happened to Diana Ferguson, a talented artist who expressed herself through haunting paintings of Greek mythology.

Not only does Kris face resistance from her family and her managing editor, she also clashes with Diana’s suspicious nephew, Eric Soares – until neither she nor Eric can deny the chemistry flaring between them. She soon learns that old news never leaves the morgue and that yesterday’s headline is tomorrow’s danger, for finding out the truth about that night twenty-five years ago may shatter Kris’s present, costing her love, her career, and ultimately, her life.

Available in e-book and audiobook formats from retailers including:


Cheryl came up behind Kris.  Her voice sounded sad and tired.  "Please don't tell my mother too much, even if you're making progress.  I don't want to raise her hopes."


Kris glanced back at Irene, who hunched on the couch, turning the locket over in her hand.  "I'll be careful with what I say.  My aunt would've been eager, too."


"How was your cousin killed?"


"She was strangled, kidnapped by a neighbor while walking alone.  We were  twelve."


Cheryl heaved a sigh.  "I'm sorry.  I remember reading about that.  It happened locally, didn't it?"


"I know you're a terrific writer.  I couldn't have been happier with the business story.  I'm just concerned about my mother."


She trudged out to her car and brushed off her windshield.  She waited behind the steering wheel as the defroster warmed the interior. Not knowing Diana's whereabouts must have tormented Irene.  Kris's family had agonized over Nicole's disappearance.  As one day blended into the next, Nicole had seemed further and further away.


Finding her was worse.


Kris had learned a new phrase that May, a litany that surged back into her mind, drumming to the beat of the windshield wipers.  If only.


If only it hadn't rained the afternoon Nicole had disappeared.


If only she hadn't climbed into the car with Randolph Coltraine.


If only Aunt Susan had been home when Nicole called for a ride.


Kris swallowed the metallic taste in her mouth.  If only I didn't trick her.


She chose the long route home, driving fast. She hadn't driven in and had forgotten the thrill of a climbing speedometer.  Her first week back, she'd landed a speeding ticket.


Kris skidded onto the Fremont State College campus, her tires kicking up tufts of snow.  She passed dorms, tennis courts and the library before parking in front of the deserted baseball field.  White trees cast shapeless shadows across the broad expanse of snow.


A chunk of ice slid off the roof, hitting the front window.  Kris jumped, her hand to her heart.


Beyond those trees, Diana had lain dead.


Police had crowded the scene, their search over.


Middle-aged reporter Dex Wagner had scribbled in his notebook.