The 13: TALES OF MACABRE by Stephanie Ayers

The 13: Tales of Macabre-
Killer watermelons, murderous jewelry boxes, centenarian sea whisperers, creatures of myth/legend, and more...
This supernatural story collection will make you reconsider everything you thought you knew. At night you'll hover under your covers while looking over your shoulder in the day. Down, down in the depths they fell; bodies in the dark of a liquid hell.
Can you survive all 12? 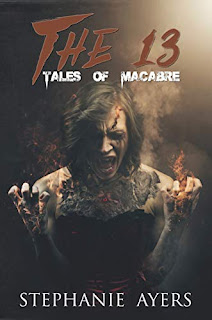 From the thrilling author of Til Death Do Us Part and The 13: Tales of Illusory comes a second volume of twelve supernatural tales of ghosts, vampires, and things that go bump in the night.
Ayers Creative Concepts  is very excited to announce the publication of The 13: Tales of Macabre by Stephanie Ayers. Her words will jump from the page and haunt you once the lights go out. They will make you look over your shoulder during the day. This collection will make you question the “what if’s” in a whole new way. This second volume in The 13 series releases on Friday, October, 26th, 2018, and there will be a Facebook Halloween Party open to the public October 12-15, 2018. (link to event here).
Stephanie has crafted each one of these hair raising stories with unique characters and plots that will catch you completely off guard. These stories will have you cowering under the covers and glancing over your shoulders before you’re done. You can learn more about Stephanie Ayers and The 13 by following along with the book blog tour which is on her website.
An Excerpt from THE 13
Kay held the box on her lap the entire car ride home. She found herself unable to stop caressing it. The wood warmed underneath her fingertips. By the time they reached their house, she knew every crack and imperfection, not that there were many, on it by heart.


“So where will you put it?” Mike held the door for Kay as they entered her apartment.
“In the only spot it belongs in! Smack center on the mantle.” She moved gracefully and set the box on the shelf under the big TV. She stepped back and admired it. “See? Perfect!”
Mike didn’t have an opinion either way. Her apartment, her jewelry box, her choice. He admitted it looked perfect right where it was. “Will it open?”
Kay shared a smile and a small shrug and tried to lift the lid. It refused to open.
“Aw, darlin, I’m sorry.” Mike put an arm around her shoulders. She shrugged him off.
“It was only a dollar. Probably because she knew it wouldn’t open.”
“Probably why she closed up so fast afterwards, too.”
“That’s a good possibility. It’s still a great conversation piece on the mantel though. We’ve already stood around talking about it longer than any other object in this place.”
“That’s true.” Mike stepped closer and wrapped Kay in an embrace. “I can think of other things to discuss at this moment.” To emphasize his point, he dipped his head and nuzzled her neck.
She stepped away from his embrace. She didn’t know why but she wasn’t in the mood. She laughed to hide the awkwardness, and touched the jewelry box again. “Do you think it will play anyway?”
Mike picked it up and put it down just as quickly, shaking his hand as if he’d been shocked. “Damn!”
Kay laughed again. “What happened?”
“It- it- it bit me.”
Kay smirked. “It bit you? It’s a wooden box, Mike.” She picked it up and shook it in front of his face. “Look, no teeth.”
“I know it has no teeth, but I don’t know how else to explain it.” He examined his hand and held it up. “Look! Explain that, then.”
Kay took his hand. She turned it this way and that way. She opened his palm and flipped his hand over. Her grunt shared all the disgust she felt. “If I didn’t know better, I’d say it’s a rather nice hand. Too bad it’s attached to a brain dead body.”
Mike’s eyes widened. His mouth opened and closed again. His nostrils flared. He pointed to his wrist, “You don’t see that mark?”
She studied his hand again and then dropped it and stepped away. “No, I don’t. There’s nothing there.”
He pointed to the side of his hand where the meat sat ahead of the bone. He could see the bite marks clear as day. They were small, but they were there. “I can’t believe you can’t see them. They are right there.”