We're continuing our character interviews, and here's Marie's heroine Desiree Edwards, the heroine of SECOND NATURE, book one of the Blood at First Sight Series. 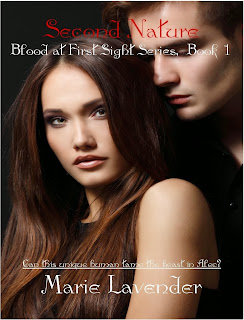 
She never expected it…

Desiree Edwards has a problem. She’s been attacked, kidnapped and forced to get along with a vampire of all things. It’s something right out of the story books she reads, or her worst nightmare. But, sometimes he’s not the monster he appears to be. He seems so humanlike that she can’t help it when her emotions betray her, when her body betrays her. To make matters worse, she finds out more about herself than she ever wanted to know.

She was unlike any other…

Alec has a problem. The animal in him wants Desiree. But, so does the man. The more he learns about her, the harder it is to deny what he wants. But, he’s a freak, and she’s just a human. The two species don’t mix that way. Then an old enemy surfaces and Alec is forced to make a choice. His life or hers.

Can Alec’s soul be saved by this unique human? Or will it be far too late?
Interview with Desiree 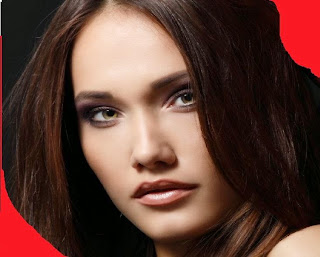 Describe yourself in one word.
Survivor.
What is your family like?
My family is pretty supportive. I have a sweet yet jubilant sister, who is now married. My dad is a hard-worker, and a very good man. They can be pretty kooky when they’ve had some drinks in them, though. (Giggles.)
What did your childhood home look like?
I lived in a two-story gray house with white trim and red shutters. My mother kept a lovely garden there, and my sister and I had a nice backyard to play in.
What kind of books do you love to read? Why?
Most of the books I read are work-related as I’m an editor for Read Street Publishing in Baltimore. I read anything from history books to cookbooks to children's books to the occasional piece of fiction that crosses my desk. I am inundated with manuscripts of all kinds so I really never run out of things to read. My favorites are the ones that pull me out of what's going on in life, the ones full of fantasy or different worlds.
Who is your role model?
I admire my best friend, Natalie Lowell, who has somehow managed to believe in romance and the power of true love. I can’t really say the same for myself, but I wish I had her faith.
Do you have any hobbies? What do you enjoy doing?
Other than reading? Hmm…well, I do enjoy different types of music, and I love collecting Native American pottery or tribal art.
What kind of person do you wish you could be? What is stopping you?
I wish I could be brave, that I could travel the world or seek out my dreams fearlessly. I wish I could take some risks, but life hasn’t really worked out that way. Besides, I think that after what happened with my ex-husband, I think I could use some time away from the drama.
What is your favorite food?
I love spicy food, any kind, but I will really eat anything as long as it’s not still trying to walk off my plate. (Laughs.)
If a fairy grants you one wish and one wish only, what would it be? Why?
I wish I could undo some of the dark holes in my life. It took so much for me to climb out and try to start over.
Tell me something that makes you sad.
Thinking of my mother makes me sad. I miss her so much; I lost her to cancer when I was about fourteen. I remember the way Mama would read us bedtime stories, Jenny and I, in our shared room at the time, and she was so animated. I get this ache in my chest when I think about her.
What is the most adventurous thing you’ve ever done?
Allowing myself to trust a strange man.
What is your greatest dream?


My greatest dream is to be content wherever I am, with whatever life has brought me.

An Excerpt from SECOND NATURE


Desiree rose on shaky legs to look in the mirror. She looked the same. When she tilted her head, she saw the blood. Damn, that man really had bitten her! What kind of freak did that? â€œShit,â€ she muttered, and grabbed a washcloth to wipe away the blood. What met her gaze next was startling, and even as she cursed once more, she backed away. Two single red puncture marks stood out in sharp contrast to her skin tone. Two holes. Two holes instead of a tooth pattern. She shivered, aware of the implications and how ludicrous it was. There was only one word for it really.
Shit, she whispered as reality glared at her.
Vampire, her mind screamed. But, how was it possible? She shook her head. It couldn't be. She looked at the puncture marks again. Vampire. Vampires existed? It went against everything she'd previously believed. Vampires. And it was so much worse than she'd thought. She'd had sex with one.
Vampires. The air left the room and her knees gave out, sending her toward the hard tile. She was faintly aware of a soft landing, a ragged curse and a hint of aftershave before she blacked out.


Book Trailer
Facebook Page for Second Nature
About Marie
Bestselling author of UPON YOUR RETURN and 19 other books. Poetry winner of the 2015 PnPAuthors Contest. Honorable Mention in the 2014 BTS Red Carpet Book Awards. Finalist and Runner-up in the 2014 MARSocial's Author of the Year Competition. Honorable mention in the January 2014 Reader's Choice Award. Liebster Blogger Award for 2013 and 2014. Top 50 Authors on AuthorsDB.com. Winner of the Great One Liners Contest on the Directory of Published Authors.

Marie Lavender lives in the Midwest with her family and three cats. She has been writing for over twenty years. She has more works in progress than she can count on two hands. Since 2010, Marie has published twenty books in the genres of historical romance, contemporary romance, romantic suspense, paranormal romance, fantasy, mystery/thriller, literary fiction and poetry. Lavender just released Second Nature, a paranormal romance/urban fantasy, in December of 2014. She released Magick & Moonlight, a romantic fantasy, back in March of 2014. Upon Your Honor, released in April of 2014, is her second historical romance. Her current series are The Heiresses in Love Series, The Magick Series and The Blood at First Sight Series. Feel free to visit her website at http://marielavender.com/ for further information about her books and her life. Marie is also on Facebook, Twitter, Google+ and LinkedIn.

A list of her books and pen names are as follows:

Marie Lavender: Upon Your Return; Magick & Moonlight; Upon Your Honor; Second Nature; "Lovers Like Us" (from the book anthology, Poets & Writers in Action)

Erica Sutherhome: Hard to Get; Memories; A Hint of Scandal; Without You; Strange Heat; Terror in the Night; Haunted; Pursuit; Perfect Game; A Touch of Dawn; Ransom; Leather and Lace