If you could travel to the 15th century what would you do? (in 25 words or less)

I Answered That Question--And Won A Prize!
While going through the Ricardian Bulletin, the Richard III Society's British magazine that I get as part of the membership, my eye caught something familiar--my own name! I won the contest they ran in the March issue, with the question, "If you could travel back to the 15th century, what would you do and why?"

The word count was real low--like 25 words--no more than one sentence.

Since time travel is one of my huge interests, having written 2 time travel novels featuring Richard, I couldn't resist including him in my trip back through 5 centuries. So I submitted:

"I would return to April 1485 and send an urgent message to King Richard not to let the Stanleys anywhere near the battlefield in August!"

On August 22, Richard was killed in the Battle of Bosworth, mainly because the two Stanley brothers changed sides at the last minute.

Richard's last words were "Treason! Treason!" Not "A horse, a horse, my kingdom for a horse!" as Shakespeare had him say. But Laurence Olivier did put up a good fight in that final scene, dying on cue to the music.

My prize is free access to "The Everyday Lives of Medieval Folk." offered by Medieval Courses  Check it out--they have some great courses on there! 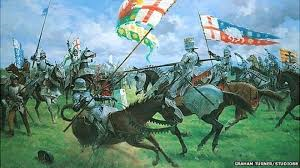 The Battle of Bosworth, August 22, 1485, where Richard III lost his crown to Henry Tudor--
and his life
The Richard III Society has greatly enriched my life and I've met some fascinating people who've become dear friends. Visit the American branch here.