My author/friend Kathleen Rowland and I do regular blog exchanges, and this summer we're telling the world our #RomanticIdea for summer. (Mine involves Sinatra). Meet Kathleen, read about her latest title, and try her romantic idea this summer! 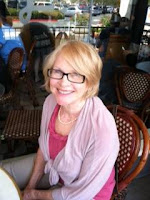 Book Buyers Best finalist Kathleen Rowland is devoted to giving her readers fast-paced, high-stakes suspense with a sizzling love story sure to melt their hearts.  Kathleen used to write computer programs but now writes novels.   She grew up in Iowa where she caught lightning bugs, ran barefoot, and raced her sailboat on Lake Okoboji.  Now she wears flip-flops and sails with her husband, Gerry, on Newport Harbor but wishes there were lightning bugs in California.


Kathleen exists happily with her witty CPA husband, Gerry, in their 70’s poolside retreat in Southern California where she adores time spent with visiting grandchildren, dogs, one bunny, and noisy neighbors.  While proud of their five children who’ve flown the coop, she appreciates the luxury of time to write while listening to demanding character voices in her head.
Kathleen's Latest Title, DEADLY ALLIANCE 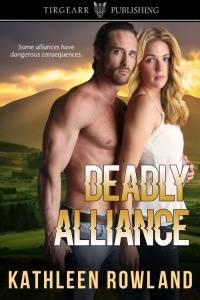 Finbar Donahue, former Army Ranger, walked on the wild side in Iraq, but now he lives in the shadows. After his evasive partner, Les, was shot in a random drive-by, Finn discovers cash is siphoned monthly, he fights to keep his investment company afloat. When the late partner's girlfriend, Amy Kintyre, applies for his bookkeeping job, Finn suspects she knows about his company drain and hires her.

Amy needs a nine-to-five with free evenings and weekends to get her fashion design business back on track. She unearths Les’ s secret bank account and alerts Finn. Freezing of the money laundering account sets off havoc within an Irish gang. Amy witnesses a gang fight between a brutal ISIS fundraising organization and the Irish. Desperate to escape a stalker’s crosshairs, she seeks refuge with Finn. As danger heats up, sparks fly hotter.


1. Nickname:  Finn. My full name is Finbar Michael Donahue.
2. Job: I own my own investment company, but who’s the chickenshit stealing money from me?  My goal is to find the thief.
3. Level of schooling:  B.A. in finance, former Army Ranger. That was when I targeted a known enemy.  Believe me, it’s harder now.
I’ve got a few questions for the heroine, Amy Kintyre.
1.     What’s your dream job? I want to get my sportswear design business back on track.  A few days ago a buyer phoned me and gave me an opportunity to present my line.  I need a nine-to-five with evenings and weekends off to sew mockups.


2.     Is that why you applied for Finbar Donahue’s bookkeeping job?  Yes, but I have a huge problem.   Last night I found a sketchy bank account belonging to my late boyfriend, Les.  He and Finn were partners.


3.     Would you enjoy working for Finn?  No, but there aren’t many job openings in Lake Arrowhead.


Short excerpt--Amy's first day working for Finn
Hours later, Finn straightened his spine as he listened to his new bookkeeper order Rosenberg around with the authority of an Army lieutenant. She spoke with confidence from her chair and waited for answers with intensity. Somehow she came across larger than her delicate self.

“Brad,” his pretty war buddy said, “I’ll need your password to access activity-to-date.” Her attitude wasn’t for show. Her curiosity propelled her to the depths of the drain. Heaven help those who lurked there.
“Sure thing.” Brad blew out a breath and scribbled his password on a sticky note. Handing it to her, he bent to her level.
She said, “I apologize for causing chaos.”
“No apology necessary.” Brad asked, “What are you working on?”
Jumping in, Finn said, “Comparisons, Rosenberg, that’s what she’s working on.” Unholy as she’d undoubtedly turn out to be, at the moment they were forged in combat. “Give her your full support.”
“Absolutely. Consider me your scaffold,” Rosenberg said, accepting his fate. “Excuse me, won’t you? I’m running payroll.”
Finn liked his head accountant. He was solid. Dependable. Not creative, but his easy-going manner was soothing. “Payroll. You’re a masochist.”
Amy smiled, and her crystal-green gaze sought his. She found his comment amusing. Her professional attire included a gray satin blouse tucked into a herringbone skirt. When she moved, her layered, dark-blonde hair settled into a sleek flip over her shoulders.
Amy’s bending and reaching, as she took control of her four-by-four cubicle, was damn compelling. She found a rhythm with a handy notepad beside her computer. Using Brad’s password, she turned sideways to open files. Attractive summed up her symmetrical profile and creamy complexion.
For a long while, getting hot and heavy had not been on his mind. Her envelope gave him concrete evidence to bring to the sheriff and eased his tension. As she brushed tresses off her face, he wanted to nibble on her ear.
Amy packed her lithe frame with succulent curves. He enjoyed observing her ample bust which required high-performance support. He’d like to see those globes running free. He’d never considered her as dating material. Timing was off. When she started dating Les, he was hooking up with Miss California. Now it was too late. She worked for him. Hands off. Finn liked women—lots of women, all women, in all shapes and sizes and ethnicities as long as they met the enthusiasm requirement. He hadn’t tested this, but she was off-limits for another reason. He didn’t intend to put her through another relationship leading to nowhere.
Finn kept things loose. A woman in his bed but not in his life was what he often said. There hadn’t been that either.  Why was she looking at him like that?


Here is Kathleen’s summertime #RomanticIdea to win any guy over:   Choose an activity that gets you into his element.  How about sailing or kayaking? Let him show you how it’s done! Beach the craft and pull him in close.  The experience of being out and about in public makes it hard for him to wait for the trip home… to have you.
Contact Kathleen
Twitter
Blog
Facebook