DOWN SALEM WAY by Meredith Allard

A Journey Back to the Horrific Salem Witch Hysteria 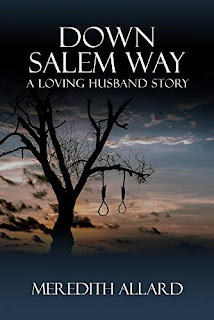 I will read anything connected to the Salem Witch Trials and the hysteria that led up to 19 innocent victims’ hangings. DOWN SALEM WAY by my author friend Meredith Allard tells us the story in vivid detail through the eyes of John Wentworth and his beloved wife Elizabeth, a couple extremely devoted to each other and very much in love. They were acquainted with many of the victims, such as Bridget Bishop, Sarah Good and Rebecca Nurse, and witnessed the horror of their trials and executions. The 1692 atrocities were enabled by “Hanging” Judge Hathorne, (Nathaniel Hawthorne’s great-great-grandfather), Rev. Nicholas Noyes and Jonathan Corwin, after witnessing the ‘afflicted’ (the young girls whose hysterical behavior triggered the events). This led to the accusations of these victims. This book will take you back to 17th century Salem and Boston (the location of another dungeon where the victims were held). I won’t tell you about an unexpected turn at the end…

I do paranormal investigations with a local group, and attended my first ghost hunt with them on Halloween Eve 2008. About ten of us visited Old Dunstable Cemetery where some victims of a 1702 Indian massacre are buried. It’s the oldest cemetery in Nashua NH, dating back from when the land was part of Massachusetts. The earliest burial dates from 1687. Researchers had found the victims’ names, so we were able to locate their gravestones.

The only equipment I had at the time were my dowsing rods and a digital camera. While others in the group made their attempts to contact spirits, I stood before a gravestone that read: this Man, with Seven more, that lies in this Grave; was Slew, All in A day, by the Indiens.

Holding my rods, I asked a few questions: "Did you die in the massacre? Were you born here?" You can only ask simple yes or no questions and ask the rods to cross for yes and separate for no. I got answers to all my questions.

I then stood before another stone reading: Rev. Thomas Weld, Born June 1653, Settled as the first minister of the church in Dunstable Dec. 1685, probably massacred by the Indians while defending the settlement June 7, 1702, age 49. All the while, I felt a strong presence, and immediately began feeling dizzy and lightheaded. I found that this happens quite frequently when I ghost hunt. I’ve never seen a ghost, but have felt presences near me, and always get dizzy when I sense someone is nearby.

I took several photos throughout the cemetery, and some came out with brightly colored arcs among the tombstones. I didn’t dare visit that graveyard on Halloween night!

My husband Chris took this photo at dusk in the old graveyard at York Village, Maine. Note the bright orb towards the right: 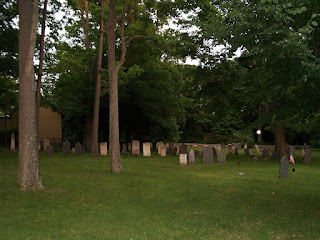 I took this photo in the old schoolhouse right across the street from the graveyard on a ghost tour with Roxie Zwicker who gives informative and entertaining tours in Portsmouth NH and York Village, Maine: New England Curiosities 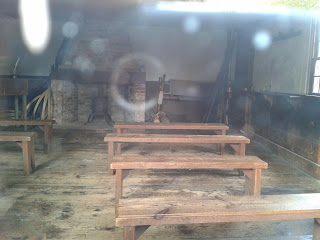