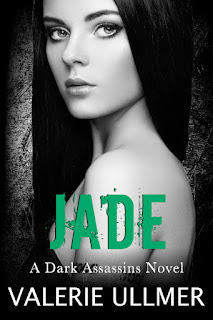 Jade never wanted a mate. She loved being an assassin and she had a family in her fellow assassins, their mates, and little Silas. She truly had everything she needed. But when Ghost assigned her to track the same immortals who tried to kill Xander’s family, she couldn’t refuse.

But the complication arises when Ghost requests she partner with Noah, a human and ex-special forces soldier. Jade has never worked with a human before, much less one that hated her from the moment he laid eyes on her. But she was a professional and if she could play a part in destroying the immortals who threatened her family, she could accept the human. If only she knew how to fight her attraction to him.

All Noah Hale wanted was to kill the immortals who lured his best friend and fellow ex-Navy SEAL to his death. He had no desire to be teamed with a beautiful tracker who mesmerized him the moment turned her emerald eyes his way. But in order to stop other soldiers from pursuing the same fate, he needed to swallow his pride and work with a group of immortals he didn’t trust.

As Jade and Noah track the group of shifters through the mountains of Colorado, the danger lurking around every corner threatens everything they both hold close. Will they be able to find a way through, together?

Jade caught a scent of a human as she entered the fourteen-story building in downtown Snowfall.  It wasn’t any human scent, but something that made all of her instincts flare.  She knew that she’d never caught this particular scent before, but something told her that this human might be important to her.  She tried to brush it off as quickly as the thought came, but she couldn’t find it coincidental she smelled it in the same steel building owned by Ghost and house the headquarters of Dark Company.

As she dismissed the fleeting thought of searching for the scent, her heart thumped once, hard, in her chest at the thought of not finding its owner.  She forced herself to walk toward the elevator bank, ignoring the unwanted perusals she received from the men in the lobby.  Even in an unassuming hoodie and black yoga pants, she drew unwanted attention.  A side-effect of being an immortal.

The elevator opened as soon as she pressed the up-button and she kept her gaze down as she walked into the elevator.  She entered the code to get to Ghost’s private floor, her movements too quick to be caught by the human eye, before she squeezed into the corner.  Jade used her other senses as three men in suits and two women entered the enclosed space with her.  There was no need to glance at the glass interior that covered the back wall to see what she looked like.
She sensed eyes on her.  Instead of searching out the gaze, she whipped her long, straight dyed black hair into a bun on the back of her head with quick movements before sneaking her hands into the front pockets of her hoodie.

Jade waited patiently as the car traveled toward the penthouse, her ultimate destination, but she couldn’t help but try and find the intriguing scent from earlier.

All she knew was he hadn’t used the particular elevator she was in and higher the lift took her in the building, the more his scent dissipated.

In her entire existence, or what she remembered of it, she’d never been attracted to…anyone.  She’d never felt the pull to find someone either.  But lately, she’d felt increasingly restless whenever she had any downtime and her skin tingled in a way that had nothing to do with signaling immediate danger.  It was as though her body tried to convey something she didn’t understand.

Her thoughts were interrupted when a man who had gotten into the elevator with her on the first floor stepped into her personal space.

Jade rolled her eyes and raised her head to glare at the man.  Of course, he wouldn’t take the hint that she wanted to be left alone.  To emphasize the point, she crossed her arms and leaned against the wall, moving away from his intrusion.
The man decided to take this as an invitation and moved to wrap his arm around her waist.  The move gave her a clear shot to his ribs and she took it, gently moving her elbow back and making contact.  She flinched when she heard a distinctive crack, realizing she hadn’t been careful enough.  Before she could apologize, the elevator door opened and he ran off without looking back, holding onto his side.