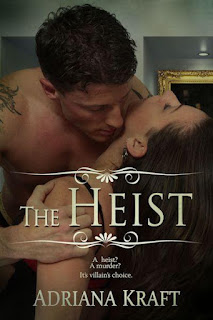 A special-order art theft? Tedious, but seamless – until small town museum director Kara Daniels calls in the experts. Furious her favorite trio of priceless impressionist paintings has been stolen from its traveling exhibit on her watch, Kara is determined to save not only the paintings, but her future in the art world. She’ll stop at nothing to entrap the thief.

Ted Springs knows the underbelly of the criminal world a little closer than he might like—but he’s turned it to good advantage, first as a police officer, and now as detective for the Upper Midwest Arts Council. His job? To guarantee the security of the valuable paintings in the Council’s traveling exhibits.

Heat sizzles when Ted and Kara collide—can they work together, before it’s too late?

Holding her breath, Kara examined the three paintings with great care. Exhaling, she used an eyepiece to study the artist signature, the composition of the work, and the layers of paint. She did her best to ignore the short, wiry man hovering about.
He’d introduced himself merely as Henri. That probably wasn’t his name. His heavily accented English suggested Eastern European roots. It was unlikely he was a resident of Thun. Ted had handled the introductions, following up on previous telephone calls to arrange the meeting and making clear that as representatives of the Art Council, they were only interested in retrieving the paintings. There would be no questions about how the works had come to be in Henri’s possession. Both men had been surprisingly gracious. If she didn’t know better, she would never guess that one was a detective and the other part of the criminal element.
Henri hardly projected the stereotypical image of the criminal she’d developed over the years. There were no threatening postures or words. She doubted he was armed. Neither was Ted. But the little man was extremely cautious. He’d only spoken of the paintings in cryptic terms, as if he were concerned she or Ted might be wired. Since they’d come to Henri’s hotel room, he should be confident about its security. Although the man looked harmless enough, the possibility of back-up loomed large. Ted had warned her not to say more than she had to and that they would likely be watched by others.
Trying to set aside the oddities of their meeting, Kara focused on her task. The paintings were good—excellent, actually. When Henri had first pulled the cloths off them, her heart had fluttered. They were as stunning as they had been when she’d first seen them at the museum.

Five stars at Goodreads: “The sex is hot and I loved the phone sex scenes. Never did I expect the ending. It was brilliant. The Heist is a winner!” Sheila G.

Five stars at Amazon: “From the start, the perspective of Kara, the museum’s director and the thieves are cleverly interwoven…  rich in detail…   held my interest and kept me reading forward.” Gaele  “Very hot…engaging, entertaining, funny and serious, well written and extremely enjoyable to read.” Donna H.