Meet Robin Michaela and Read About her Paranormal Romance BABY, THAT'S THE SPIRIT! for our #EggcerptExchange 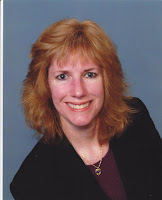 Robin has been reading romances since her teen years, when she first snuck her aunt’s copy of The Flame and the Flower by Kathleen Woodiwiss.

She’s married to her own Handsome Prince (a military airman) and has lived everywhere from the sunny shores of Florida to the wild crags of the Colorado Rocky Mountains. She currently resides in the Deep South. By day, she’s a dental hygienist and by night, Robin can be found eating chocolate, training for her next half marathon, and crafting her next novel (although not necessarily in that order).

Robin’s stories have been called “a simply delicious escape”. Sparks fly and desire sizzles when her irresistible heroines challenge the men of their dreams. 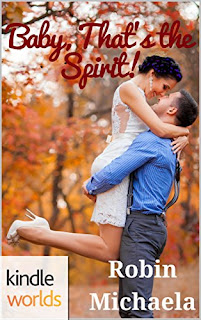 About Baby, That’s the Spirit!

When free-spirited clairvoyant, Amethyst Raines, comes to Sweetness to tell fortunes at the fall festival, she crosses circuits with hunky electrical contractor, Adam Burkett. While she’s drawn to him, she has no intention of getting involved with the sexy single dad. The problem is, she has a message for him from beyond the grave…and, she’d deliver it, if she could just get the infuriating man to believe she can speak with the dead.

Cynical skeptic Adam is tired of deceitful women. All he wants to do is finish out his job contract and settle his beloved grandmother’s estate before saying good-bye to Sweetness forever. And, he’s definitely not going to be tempted by a woman who claims she can talk to spirits. But when his little girl goes missing, Adam will do anything to find her, including putting his faith in the seductive medium he can’t seem to resist.

She’s trying to solve a century-old secret; he’s trying to find his daughter. If they can work together, their relationship just might stand a ghost of a chance.


Excerpt
Not wanting to startle her, he called out a greeting when he got closer. “Good morning. I see you’re getting a head start on the decorations for the Sweetness Spooktacular.”
She turned to face him. Her full lips curved in a warm smile as she raised a slim hand to shield her eyes from the glare of the morning sun. “Yeah, I’m an early riser. I was here yesterday when they marked the grounds for the vendors and finished dropping off supplies. Since I’m one of the volunteers, I figured I'd go ahead and get started."
She shrugged as she extended her hand in greeting. The movement caused her sweater to slide off one shoulder, revealing smooth, tanned flesh just begging to be touched.
He concentrated on aiming for her hand when he really wanted to run his fingers over her tempting skin. "Adam Burkett. I own this property.”
“Starla-Amethyst Raines," she said. "Although everyone just calls me Amethyst unless they’re really angry at me.”
A tingle ran up his arm when their hands connected. She was tall and he felt a quick stirring south of his belt buckle when the light autumn breeze plastered her long-sleeved, gauzy violet blouse against her luscious curves.
Damn, but she wore a lot of purple. He raised a brow, wondering if she felt obligated to live up to her name. Her short dark hair was liberally streaked in shades of purple and lavender. Dangly silver and lilac earrings winked at him as she tilted her head to one side and regarded him through the most mesmerizing whisky-colored eyes he’d ever seen. Her gaze was direct and seemed to bore deep inside him, almost down to his very soul.
Adam didn’t realize he was staring until she tugged her hand free of his. Pushing a windblown lock of hair off her forehead, she laughed. “I know, I know, too much purple. But, really, what other color can you work with when your parents name you Amethyst?”
“That isn’t what I was thinking at all,” he answered, but guilt flashed through him because it was exactly what he’d been thinking. Hell, she even smelled purple, with her light floral scent that reminded him of lilacs in the springtime. If a color could be defined by a person, this woman’s picture would definitely be listed under “purple” in the dictionary.
Suddenly remembering that she’d looked as if she’d been conversing with someone, he leaned around her, searching the shadows of the porch beyond the fake cemetery with his eyes. "Who were you talking to a second ago?”
"What makes you think I was talking to anyone?” She dropped her gaze to a nearby tombstone, making him wonder if she was hiding something.
“It sure looked like you were.”
“Well, do you see anyone else around?” She put a fist on each hip and frowned at him.
“No, I don’t,” he grudgingly admitted. “Unless you were talking to one of the ghosts down here.” He smirked and nudged a tilting headstone with a booted foot until it stood up straight.
Amethyst's brows drew together. “Who knows? Maybe I was.”

*FREE to read on Kindle Unlimited

Connect with Robin
Robin loves to hear from readers.