Always on the hunt for the uncommon things in life, award-winning author Sheri Fredricks thrives on creating romantic adventures.


A former engineering secretary, she lives on California’s beautiful central coast. "I wanted to move away from a profession of inflexible right angles and create an unboxed world with no boundaries." A voracious reader since her early years, Sheri found her brain crowded with stories of her own. "Ultimately," she says, "my husband encouraged me to write them all down."


Sheri loves to spend time at home and connecting with readers. A computer hutch keeps her focused on creating stories, but the panoramic view of life on a ranch will call her outside to play in the sun. 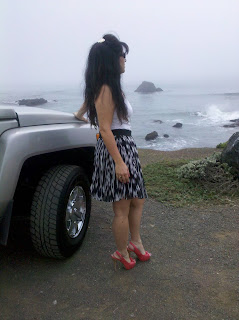 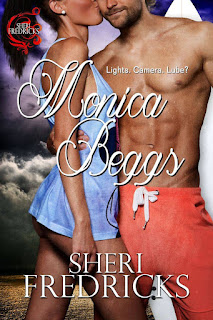 Lights. Camera. Lube?
Famous porn star Monica Beggs wrapped up another grueling on-location movie shoot when the Colombian cartel attempted to kidnap her. Their guns are as real as the price on her pretty head.
Former Special Ops and present day surfer, Finn Daniels recognizes a lady in distress when he sees one—especially if it’s his adult film crush being hustled out the door. He’s no longer in the business of busting up the underworld, but that doesn’t deflect his moral compass.
In a fast-paced adventure—over land, sea, and air—playing it hot and heavy will lead them straight into action!
Setup and Excerpt
As a precision military Spec-Ops man, Finn had been confident and bold. But now, with the beautiful adult film star Monica Beggs under his roof and in his protection, he lets down his guard and succumbs to his growing attraction.
No matter how many movies she’d made, or sexual positions that’d made her famous, Finn got the distinct impression the woman who knelt at his feet with her eyes closed, gently caressing his balls, was not one and the same.
Euphoria lifted his spirits. His pulse pounded faster. He equated the feel of exhilaration to being the first surfer out at daybreak, shredding waves through the misty morning rollers. A pleasant ached bloomed in his chest.
Monica backed off. A sweet slurping sound ensued before she took a breath and went down again. Her lips wrapped his width and she began another steady rhythm as her fist slid along a spit-shined track.
Each time she skated to the top, she held him in a tight grip and flat-tongued his sensitive underside with a side-to-side motion. Her free hand massaged his balls, encouraging the ache to build.
Finn’s eyes rolled back. His brains splattered the inside of his head as if the grey matter were made of popcorn. At a slight tug from down below, he reapplied his blurry vision.
Her grin turned positively devilish. “You ready to accept defeat, Big Kahuna?”
Somehow managing a half-step back on legs the consistency of spaghetti, he lifted the porn star to her feet. “We’ll see who the victor will be. Lose the dress.”
Download MONICA BEGGS
Amazon.com:  http://amzn.to/1P79l1U
Amazon.ca:  http://amzn.to/1j0tFXN
Amazon.fr:  http://amzn.to/1KoKfJJ
Amazon.co.uk:  http://bit.ly/1QRixYu
Amazon.co.jp:     http://amzn.to/1LGMCpa
Amazon.de:  http://amzn.to/1R1JpnX
Amazon.com.au:  http://bit.ly/1FVJ28B
Barnes & Noble
Kobo
Follow Sheri:
Romantic Ideas to Enjoy this Summer
As a romance author, I have a file where I jot down date ideas. If I need an idea for a scene I’m writing, I skim through and see if any of them fit.
Maybe you’d like to try one of my date ideas and let me know how it turns out for you! Here’s a few:
1.   Horseback Riding
Rocking hips and cowboy hats — it doesn’t get more romantic than that.
2.   Hit the Beach
Coconut oil, sparkling water, warm sun, and lots of skin. A modest form of nakedness!
3.   Go Retro With A Drive-In Movie
It’s like a regular movie, except with a private back seat!
4.   Old-Fashioned…With A Twist!
Going out to dinner means there’s no mess to clean-up. Follow it up with a hot tub for two — and it’s a recipe for romance.
If you have an idea you’d like to share, I’m all ears.
Look for more books to come in my shapeshifting centaur series.