A High Profile Murder in 19th Century Salem--Perfect Subplot for my Next Book!

Working on my next book, a bio novel about Sophia Hawthorne, I wanted to add a murder subplot. Since I don't put fictional characters in my books, I wanted a real murder case--the more high profile the better. I Googled murder cases in 19th century Salem MA, and what popped up? A famous murder that happened in a mansion on Essex St. that I've walked past a million times, and the tour guides always point out the brutal stabbing that happened there. Voila! Why didn't I think of it before? It's so obvious! The murder also inspired Poe and Hawthorne in their stories, especially Hawthorne in The Scarlet Letter.
Check out this cool website, Murder by Gaslight. --it tells all about the Salem murder. 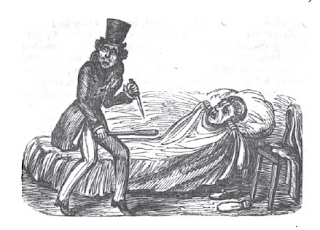