We all have vivid stories of how we became fascinated with our favorite historical figures. As a Ricardian, of course I have my story of how I 'met' Richard III (in a book that was mislaid on a shelf in the Cambridge Library stacks), and in 2009, Aaron Burr displaced Abe Lincoln as my favorite American (sorry, Abe!). While researching my novel about Alexander Hamilton, I began reading about Aaron, who sparked a deeper interest in me than Hamilton ever did. I had to write my next bio novel about him and his last wife Eliza, and during my research journey, I discovered the Aaron Burr Association. I must say I'm enjoying my membership in the ABA as much as I've enjoyed my 24-year membership in the Richard III Society. I've met the most amazing people, and have made some terrific friends.

I met John last October during the ABA's conference in Connecticut, and he graciously agreed to be my guest here.

Jane Merrill, John's co-author, is the author of many books and magazine articles. She lives in Saint George, Maine.

John has practiced law in New York, Texas and Connecticut. He lives in Litchfield, CT, the town in which Aaron Burr first studied for the bar.

Meet John, read about his research and writing journey, and his famous ancestors. 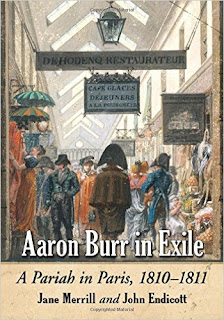 About AARON BURR IN EXILE

Aaron Burr--Revolutionary War hero, third vice president of the United States and a controversial figure of the early republic--was tried and acquitted of treason charges in 1807, and thereafter departed for self-imposed exile in Europe, his political career in ruins. Adrift in Paris for 15 months, he led a marginal existence on the run from creditors and the courts, getting by on handouts. While other Americans in Paris enjoyed official status that insulated them from life in the capital, Burr dreamed up fruitless schemes and pawned his possessions, yet remained in high spirits, enjoying Parisian theater and cafes. He shopped, flirted, paid for sex and associated with friends old and new while gathering the resolve to return to America.

Burr's Paris journal is a rare item, with only 250 unexpurgated copies printed in 1903. In it he relates his fascinating stories and describes Parisian life at the height of Napoleon's power. Drawing on Burr's journal and other sources, this book provides a self-portrait of the down-and-out Founding Father abroad.


Burr’s career as an American politician came to an abrupt end on the morning of July 11, 1804, when, as vice president of the United States, he mortally wounded his long-time political adversary Alexander Hamilton, in a duel on the shore of the Hudson River.  After the duel, Burr presciently wrote to his son-in-law,  “The event of which you have been advised has driven me into a sort of exile, and may terminate in an actual and permanent ostracism.”  Under indictment in New York for killing Hamilton, Burr could not return to his New York City law practice, and so he decided to embark on a Western adventure which led to his 1807 trial for treason.  Notwithstanding Burr’s subsequent acquittal, Jonathan Russell’s description of Burr in 1810 as a “fugitive from justice” in “voluntary exile” in Paris was entirely correct, in that Burr had left America for Europe to escape not only from his creditors but also from an Ohio misdemeanor indictment (which, like the New York murder charge, was never prosecuted).  And Burr was correct in predicting the “permanent ostracism”, which followed him to Europe, and which indeed lingered on for many years up to the day of his death in September 1836 at the age of eighty.


Here is Burr, in July 1809 in Hamburg on his way to Paris, noting that his dubious reputation had preceded him to Europe: I find that, among the great number of Americans here and there, all are hostile to Aaron Burr—all.  What a lot of rascals they must be to make war on one whom they do not know; on one who never did harm or wished to do harm to a human being.  Yet they, perhaps ought not to be blamed, for they are influenced by what they hear.  I further learn that Aaron Burr is announced in the Paris papers in a manner no way auspicious.


Without any doubt, Burr was deluded to claim he never harmed a human being, given his killing of Alexander Hamilton just five years earlier.  On the other hand, the 1903 owner, editor, and publisher of Burr’s European journal, William Bixby, had this to say about the Burr-Hamilton duel:  “The duel was conducted with the utmost propriety, the participants took equal chances of life or death, and, according to the ethics of that age, though not of this, neither was in the slightest degree censurable.” So perhaps, in Burr’s thinking, Hamilton’s killing didn’t count; either that, or perhaps Burr was referring in the above passage only to his claim of innocent conduct in the Western adventures which had led to his treason trial.
Purchase AARON BURR IN EXILE from Amazon
An Interview with John


John, can you tell us what gave you the idea to write about this part of Aaron’s life, rather than his earlier or later life?  How and when did you get interested in Aaron?

How long did your research take? Did you visit any historic sites for research?


No, I did not visit sites other than the law school in Litchfield where Aaron Burr studied law with his brother-in-law Judge Tapping Reeve.  Research proceed off and on over a period of about three years.


Do you have any other books out?


My co-author Jane Merrill has an Amazon page with many of her books listed.  Aaron Burr in Exile is the only book I have had published.

I have no other books in the works.  Jane is working on a biography of Count Rumford, an American contemporary of Burr’s.

Vera Brittain’s TESTAMENT OF YOUTH and Robert Grave’s GOODBYE TO ALL THAT, both World War I memoirs.  Another excellent book on WWI is Paul Fussellâ’s THE GREAT WAR AND MODERN MEMORY, illustrated edition.


Can you tell us a bit about your famous ancestor John Endecott?


He was one of the original overseers of Harvard College, my alma mater, and in 1642 approved the college seat, three books with the legend VE-RI-TAS  (truth).  I am actually more interested in my great-great-great-grandfather Robert Rantoul, Jr., a liberal U.S. Representative and Senator from Massachusetts in the early part of the nineteenth century, who had a lot to do with educational reform, anti-slavery and pro-trade-union activities.