Kasia is  an author, athlete wannabe, food & wine lover, and blogger, living with her husband and son on the Gold Coast, Australia. A run along the coastline generally gets her muse buzzing. Meet Kasia and read about her latest title, LETHAL DISPOSAL, a Lexi Ryder Crime Thriller.
You can contact Kasia at kasiajradzka@gmail.com or stop by her website.
About LETHAL DISPOSAL 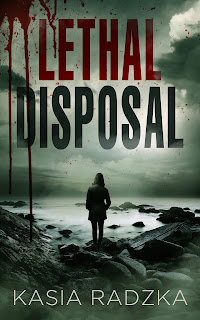 Lexi Ryder vowed to never return to the Gold Coast, but after a desperate phone call from an old friend, she returns only to learn her friend is dead.


Was it murder or an accident?


Lexi finds herself embroiled in a game of politics, assassinations and secrets. A world where people are not who they seem.


Detective Matthew Ryan wants Lexi as far away as possible from him and the case. But Lexi knows too much. After a public assassination they discover that whoever is responsible is willing to go to great lengths to dispose of those who get in the way of their plans.


Is Lexi willing to risk her own life to seek the truth?


Money, status, and power. Some people will do anything to get it, others will do whatever it takes to keep it.
Eggcerpt
Posted by Diana Rubino at 12:00 AM