Mit's life story fascinates me. I read about him on a writer's forum and knew I had to get to know him better. He's guested here before, but when he told me he just published an adult coloring book, I had to invite him back. I just bought my first adult coloring book, SECRET NEW YORK, and colored in it for the first time the other night. I use Crayola crayons, and inhaling that wax fragrance sends me right back to childhood. 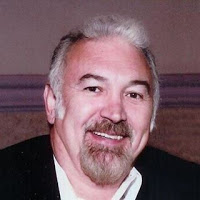 Mit, full name Dumitru Sandru, is a true Renaissance man. He was born in the greater area of Transylvania in the last millennium; make that last century since he's not a vampire. Yet. When he was six years old, a soldier shot him at point blank range with a Kalashnikov. He survived. He outsmarted his German teacher, and survived a tornado in the middle of a wheat field. Not concurrently. When he was 18 years old, he escaped from a country resembling a concentration camp, luckily without being killed. He outran mean border patrol dogs in a foreign country, in the darkness of night, while jumping over six-foot tall stonewalls. Superman he's not. He came to the USA in search of freedom, glory, wealth, and fame. He's still searching for three of those. Lightning grazed him, and he caught a shark by the tail. Once. A monkey attacked him in Japan, but his daughter saved him. He avoided many rattlesnake bites, and built a house. No relation between the snakes and the house. Life eventually tamed him and he became a responsible citizen, with a wife, two daughters, dog and cat. And lately two grandsons. The taming part is questionable. He acquired an engineering and management degree and attempted to acquire other degrees in music, marketing, and IT. A certified student. He obtained many professional licenses, which he hardly used, but looked good on his wall. At 59-¾ years old he quit the corporate life and a six-figure salary. Rumor has it that he was given the golden handshake. He was finally free to pursue his dreams of writing, painting and music.
During his professional life he painted hundreds of canvases, and composed dozens of tunes, while since his golden handshake he wrote 11 books in YA Fantasy, Sci-fi, Paranormal, Thrillers and Vampire genre. He is an artist, composer, painted hundreds of canvases, and composed dozens of tunes.  And that was in just the first half of his life.
Disclaimer: Everything written here is true, and the bullets were blanks.
I am Dumitru Sandru and I approve this unabashed bio.
Want to see and read more about the second half of his life? 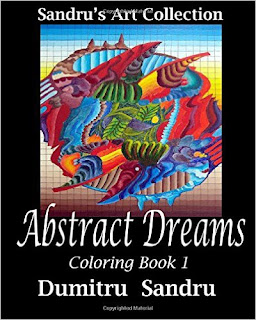 Recently I published a coloring book. It is for all ages, but because it contains abstract drawings it is better suited for grown ups. Why a coloring book? The simple answer is: Because they’re popular. The real reason is more complicated than that. Although I’m an artist, besides an author, I wouldn’t sit down and draw new contents for a coloring book. There are far better artists out there who can do that, and the subjects can range from flowers, birds and butterflies, mandala and geometric shapes, animals and scenery, bugs and even obscene language. Everything you can imagine is available.


In my case I already had all the material I needed. Over the years I sketched hundreds of abstract drawings. I painted very few of them, because of time constraints, although I love what I drew. So when the light bulb came on in my head about a coloring book, why not publish one with samples of my abstract sketches? And that’s what I used in “Abstract Dreams- Coloring Book 1, from Sandru’s art collection.” This book contains only 30 sketches from the 100 of similar sketches I drew in sketchbook 1. And I have five more sketchbooks like this one.


You may wonder about the “abstract” part of my drawings. Usually “abstract” is associated with modern art, represented by splashes and splatters and mixtures of colors and other mediums, having very little resemblance to anything you and I may recognize. But then abstract paintings are not intended to be recognizable. They intend to provoke feelings, which sometimes are pleasing and sometimes not so much. Well, my abstract art is pleasing, composed of line drawings that may evoke certain feelings when viewed. Coloring them will produce different outcomes than the original sketches might have shown.


And that’s the story behind my first coloring book for adults. Will it be a second one? It depends on how popular the first one will be. So far I’m giving away two copies of Abstract Dreams on Goodreads and there was a phenomenal response from the readers/coloring artists, almost one thousand requests.