I met Gwendolyn through the Aaron Burr Association, which I joined when researching my biographical novel of Burr's last wife Eliza Jumel. She's a true Renaissance woman. 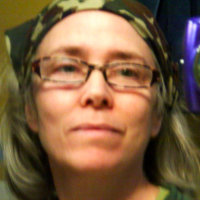 Gwendolyn has been writing on law and politics for twenty years. She became an investigative reporter and legal commentator (sub nom Jennifer Van Bergen) for various online news outlets after 9/11 and has published two books prior to MALICE: THOMAS JEFFERSON'S CONSPIRACY TO DESTROY AARON BURR as well as several scholarly law journal pieces.

Her research on Burr's friend and protege, novelist Leonora Sansay uncovered and established that mysterious woman's true origins and biographical history for the first time since her first anonymous novel came out in 1808, the year of Burr's treason trial.

A former theatrical actress and director, singer/songwriter, poet/playwright/short story writer, Gwendolyn has also been developing a musical based on her "Malice" book (12 songs already produced), and is circulating her 3-scene, one-act short play using mostly actual words of those involved in the Jefferson conspiracy. She is presently outlining a film screenplay, as well, based on the same story.

She has a law degree from Cardozo School of Law (1999) but does not practice law due to a long illness from Lyme disease, contracted in 1992. She also has a Master of Science in Int'l Education (2009) and 30 credits towards an LL.M. in Environmental Law from Vermont Law School (earned in 2011). She taught Archetypes for Writers for ten years (1993-2003) at the New School University in NYC and taught law at the Anglo-American University in Prague (2009). See her profile on Facebook.
About MALICE: THE THOMAS JEFFERSON'S CONSPIRACY TO DESTROY AARON BURR 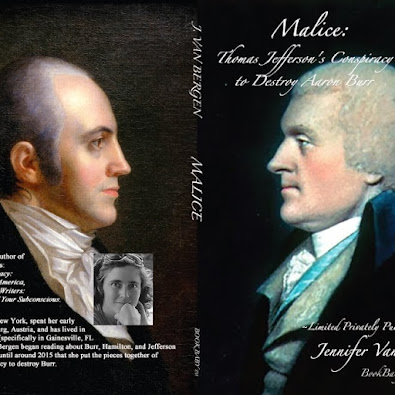 The conspiracy conducted by President Thomas Jefferson to destroy his former Vice President, Aaron Burr was covered up and buried for more than 200 years. Van Bergen has unearthed the details, the elements of the crime, and the conspirators in this scholarly, nonfiction book that dips in and out of various aspects to make the case.
Connect with Gwendolyn
Purchase MALICE on Amazon
Posted by Diana Rubino at 9:00 PM