I've been a HUGE JFK assassination buff since that very day. Everyone who was alive on November 22, 1963 knew exactly where they were and what they were doing when they heard the news. I was in my first grade classroom. The teacher got a call on the classroom phone and told us ‘the president was shot.’ A collective gasp went around the room. I was 6 years old and in first grade. It was ten years before I saw the footage of Ruby shooting Oswald, on an anniversary documentary.

But it was my grandmother who got me interested in the biggest mystery since 'who killed the princes in the Tower?' (I'm a Ricardian; that's for another post).  She got me embroiled right along with her.
She listened to all the radio talk shows (those who lived in the New York area might remember Long John Nebel, on WOR, WNBC, and WMCA, all on AM radio (FM was really 'out there' at that time).
She recorded all the radio talk shows. She bought whatever books came out over the years, along with the Warren Commission Report, which I couldn't lift at the time, it was so heavy. But my interest never waned in the 51 years that followed.
In 2000, I began the third book of my New York Saga, set in 1963. The heroine is Vikki McGlory Ward, daughter of Billy McGlory, hero of the second book, BOOTLEG BROADWAY, set during Prohibition. This was my opportunity to write a novel showcasing all my current theories, and continue the saga. It took a minimum of research, since I remember all the 60's brands, (Bosco, Yum Berry, Mr. Bubble...), the fashions, the songs, and I even included a scene set on that unforgettable night when the Beatles first appeared on the Ed Sullivan Show, February 9, 1964. 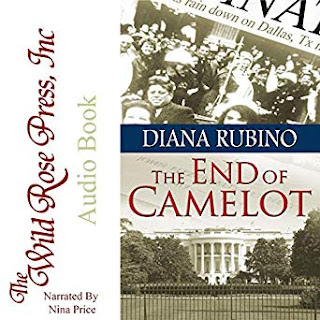 About THE END OF CAMELOT  (in print, on Kindle, and now on audio with the expressive animated Nina Price)

The third in the New York Saga, The End of Camelot centers on Billy McGlory’s daughter Vikki, whose husband is murdered trying to prevent the assassination of John F. Kennedy. Vikki uses her detective skills to trace the conspiracy, from New York to New Orleans to Dallas, and at the same time, tricks her husband’s murderer into a confession. A romance with her bodyguard makes her life complete.

November 22, 1963: The assassination of a president devastates America. But a phone call brings even more tragic news to Vikki Ward—her TV reporter husband was found dead in his Dallas hotel room that morning.

Finding his notes, Vikki realizes her husband was embroiled in the plot to kill JFK—but his mission was to prevent it. When the Dallas police rule his death accidental, Vikki vows to find out who was behind the murders of JFK and her husband. With the help of her father and godfather, she sets out to uncover the truth.

Aldobrandi Po , the bodyguard hired to protect Vikki, falls in love with her almost as soon as he sets eyes on her. But he's engaged to be married, and she’s still mourning her husband. Can they ever hope to find happiness in the wake of all this tragedy?

Purchase THE END OF CAMELOT on Amazon

It was New Year’s Eve, they were alone, and he was harmless. So far. So she took the necessary two paces over to him and placed the honey ball between his custom-made choppers.

He closed his eyes, and she watched him savoring the sweetness. She didn’t dare say another word as she ran her index finger over a glob of cream on the cannoli plate, raised it to her lips and licked. “Mmmm,” she voiced, wishing she hadn’t.

Their eyes met and locked. Faster than lightning, they came together like magnets. Their lips met, sweet and sticky and hot. She didn’t want him to stop, but her inner voice screamed how wrong it was—It’s forbidden!—echoing the nuns in Saint Gustina’s. She shooed it away like an annoying fly. Leave me alone, I’m not a kid anymore. Her arms circled his neck, and his hands slid down to the curve of her back. Dare she move in closer, pelvis to pelvis, an unthinkable act three seconds ago? Her body was betraying her, betraying Jack, taking on a will of its own as she crushed herself to him. The kiss intensified. She tasted cannoli, and her fogged mind told her he’d been sampling them all day. She breathed in his cologne, so foreign it repelled her, so new it aroused her even further. Her tiara slipped off her head. She caught it just as he pulled away.

He held her at arm’s length as in a tango. “Oh, cara mia,” he growled—and if he said another word in Italian, she knew she’d explode. A passion long dormant stirred inside her.

My favorite passage from the book:

Billy came down the stairs for a nightcap and glanced into the living room. He noticed the glow in the fireplace, Vikki’s eyeglasses and the anisette bottle on the table. The couch faced the other way, but nobody was sitting on it. “Where’d they go?” Then he realized they hadn’t gone anywhere—and they were on the couch, but not sitting. Before he got out of their way, he placed a long-playing record on the phonograph. Jackie Gleason’s “For Lovers Only.”

An Audible review:
The End of Camelot is a fabulous read. It takes place back in time when President Kennedy was tragically assassinated. The main character is Vikki Ward, who is dealing with her own tragedy when her husband is also assassinated. She is determined to connect the two murders and find out the truth of what had happened. I enjoyed the mystery and suspense. It kept me intrigued throughout. I never knew what was going to happen next. I recommend it to other readers, especially the fabulous performance of Nina Price in the audio version. She does a great job! --Amy C.
Posted by Diana Rubino at 7:00 AM