Meet Paullina Simons, Win Her New Book THE TIGER CATCHER, and Other Prizes

Paullina Simons was born and raised in Leningrad, USSR. In 1968, her father was arrested for protesting the Soviet Union’s invasion of Czechoslovakia and spent the next five years of his life in the Gulag prison camps and in exile. In the mid-seventies, Paullina and her family managed to leave the U.S.S.R. and immigrate to the United States. While growing up in Russia Paullina dreamed of someday becoming a writer. Her dreams were put on hold as she learned English and overcame the shock of a new culture.
After graduating from the University of Kansas and various jobs including working as a financial
journalist and as a translator, Paullina wrote her first novel Tully. Through word of mouth, the book was welcomed by readers all over the world. She has since written twelve novels, a memoir, a cookbook, and two children’s books. Her books have been published in over 23 countries, sold millions of copies, and have been on many bestseller lists around the world.
Paullina has lived in Rome, London, and Dallas, and now lives in New York with her husband and half of her children.
THE TIGER CATCHER is Paullina’s first book in the new End of Forever Trilogy. A BEGGAR’S KINGDOM, Book Two, will be published in August 2019, and the final book in the trilogy, INEXPRESSIBLE ISLAND, will be published in December 2019.


About THE TIGER CATCHER 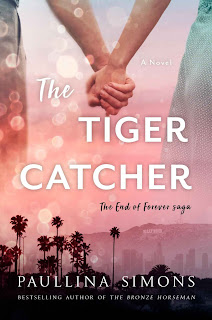 All the colors of your world are about to disappear…
Young and handsome, Julian lives a charmed life in Los Angeles. His world is turned upside down by a love affair with Josephine, a mysterious young woman who takes him by storm. But she is not what she seems, carrying secrets that tear them apart—perhaps forever.
So begins Julian and Josephine’s extraordinary adventure of love, loss, and the mystical forces that bind people together across time and space. It is a journey that propels Julian toward either love fulfilled…or oblivion.
The Tiger Catcher takes readers from the dizzying heights of joy to the depths of despair and back again in an unforgettable new novel from a master storyteller.
Purchase THE TIGER CATCHER
Email me at diana@dianarubino.com to win an autographed copy of THE TIGER CATCHER.
Click here  to win:
•             A TIGER CATCHER tote
•             A quartz crystal necklace
•             A red beret
•             A “From the Desk of Mr. Know-it-all” notepad

One lucky winner in the continental US will win this Grand Prize and a runner-up will receive a quartz crystal necklace.

An interview with Paullina:


Q. Have any favorite authors influenced your writing? Who were they?

A. Dickens for his great humor.
Hugo for his extraordinary capacity to write profoundly and poetically about the human condition.
Thomas Hardy for making prose sound like poetry.
Truman Capote for his obsessive attention to style.
Ira Levin for his sturdy, strong, clear, well-written storytelling.
Stephen King for the "I can't put it down" narratives.
Dostoyevsky for his tortured Russian soul that his books are stamped with.

Q. Do you encounter any obstacles in writing? If so, how do you overcome them?

A. I am full of obstacles. My body aches from sitting in one position, I'm hungry, I'm thirsty, sometimes I don't want to get out of bed, sometimes I want to play the piano, or walk outside in the sunshine, or go shopping. I overcome it by my obsessive nature. Whatever I start doing, I want to continue doing. So I force myself to start with my work. It doesn’t always work, I can’t always force myself, but when I do, then I can't even remember the other things I wanted to do. There is no balance.

Q. Do you start with an outline, index cards, etc., or write from the seat of your pants and make it up as you go along?

A. Since I write fiction, I'd say I do make it up as I go along, sort of the nature of the job, but I don't make it up as in, I don't know where I'm going. I always know where I'm going. How I get there is another matter. I don't do index cards. That's a surefire way for me not to do what it says on the card. I've got the oppositional disorder syndrome. If I make a list, I will only do the items that are not on that list.

Q. Where and when do you write? Tell us about your favorite work place and time.

A. I have a small writing studio less than a mile from my home. I go to work in the morning after I drop off my daughter at school and then come home at dinnertime. That sounds much saner than it is because as I get deeper into a book, it gets harder and harder to turn it off. So I’ll often also work at home, in bed, on the train—almost anywhere.

Q. What is your advice to aspiring writers?

A. Write your first book, everything follows from that.

Q. Which book that you've read (not one of yours) is the closest to your heart? Why?

A. Gilda Radner's It's Always Something. Because it's heartbreaking. It's so full of humor and hope and desire to live, to lick this thing that's killing her. Her soul is on every page. And the poem that ends the book that Gene Wilder found when he was going through her things after she died is just devastating. “My body turned its cold back on me, at less than forty-three…”

Q. Some writers edit excessively as they write; others wait until a novel is finished to do the bulk of editing. How about you?

A. I’ve tried it both ways, but usually I write the first draft and then see where I need to make changes. The other way, I once spent three months writing and revising and editing one 30-page chapter, and when the actual book was finished, I had to delete most of it and start again. So I learned my lesson. Because it's only when you have the whole story down that you really know what part you keep and what part you throw away.
Also, writing and editing come from related but different parts of my brain. Editing is meticulous, analytical, and left-brained, while writing flows and is right-brained.

Q. If you could be dropped into any book as a character, who would you be and why?
A. Dorothy Gale from The Wizard of Oz books.

Q. What are you reading now?
A. Down and Out in Paris and London by George Orwell and The Book of Longing by Leonard Cohen.

Q. Do you listen to music when writing or do you need silence?

A. I used to listen to music nonstop while I wrote my books, many of the songs on infinite repeat, but in 2008 I began teaching myself to play the piano and that ruined background music for me for good. Because I can't hear anything now without my hands trying to form the sounds on the black and white keys and the brain following along.

Q. Which three historical figures would you most have wanted to meet?

Q. Describe yourself in one word.
A. Anti-punctual.