In 2006, I decided to combine my love of Lincoln and the paranormal. I began researching A NECESSARY END, my paranormal twist on John Wilkes Booth's insane plot to assassinate President Lincoln. It contains no fictional characters. 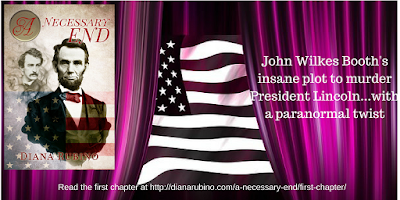 Abraham Lincoln has fascinated me since I was eight years old. I don’t know what got me started, but it might’ve been a book which I still have titled The Life of Abraham Lincoln, Volume 1, written in 1895. When I was in 3rd grade, in the mid-60s (which shows how long I’ve been a Lincoln nut), my teacher asked us to bring a book to school from home, for a show & tell. My mother suggested I bring this Lincoln book, which even in 1966 was in bad shape—yellowed, stiffened strips of Scotch tape barely held the covers to the spine. With the wisdom of an 8-year-old that sadly, all of us outgrow, I demurred, saying, “This old book? She’ll think we’re poor!” My mother corrected me: “No, she’ll think we’re rich. Books like this are rare.” Then she proceeded to tape it up some more.

Those 47-year-old Scotch tape fragments adhere to the book’s spine and pages to this day. My teacher, Miss Cohen, was duly impressed. I treasure that book to this day, and it’s one of many on my “Lincoln shelf” which holds books about our murdered president, his wife Mary, his assassin John Wilkes Booth and his family, the “Mad Booths of Maryland” and the conspirators who faced the gallows or years of hard labor because Booth, their charismatic leader, sucked these poor impressionable souls into his insane plot.

After writing 8 historicals set in England and New York City, I wanted to indulge my passion for Lincoln-lore. I began researching in depth about Lincoln’s life, his presidency, his role in the Civil War, and Booth’s plans to first kidnap him, and then to assassinate him. A NECESSARY END combined two genres I’m passionate about—history and paranormal. I joined The Surratt Society, based in Maryland, and attended their conferences and tours. Through the Surratt Society I met several Lincoln/Booth/Civil War experts. One lady I’ll never forget meeting is Marjorie “Peg” Page, who by all accounts except definitive DNA testing, is John Wilkes Booth’s great granddaughter. My trips to Lincoln's home and tomb in Springfield, Illinois, Gettysburg, Ford’s Theater, and the house he died in, Petersen House, brought me close to Mr. Lincoln’s spirit. My travels also acquainted me with Booth’s brother Edwin, the most famous actor of his time, and his unconventional family.  A recording of Edwin’s voice reciting Shakespeare on one of Edison’s wax cylinders still exists at  http://www.britannica.com/shakespeare/browse?browseId=248018 My paranormal experience includes investigations at several haunted homes, restaurants and graveyards. I investigate with a group from Merrimack, NH, led by CC Carole, www.ccthehuntress.com. I’ve never seen a ghost, but I’ve received responses to my questions with my dowsing rods. Wishing I had my recorder with me, I made a ghost laugh at the Jumel Mansion in Harlem, New York City, (see the story and photos on my blog, www.dianarubinoauthor.blogspot.com)
Tragically, we’ll never hear Abraham Lincoln’s voice. But his spirit lives on. In my book, which is fiction--but we all know that novels are fictionalized truths--I gave Booth what was coming to him. He got his justice in real life, but in A NECESSARY END, he also got the paranormal twist he deserves.
And I enjoyed sticking it to him!
I paralleled the Shakespeare play Julius Caesar in this story because in the play, Caesar was known as a tyrant to the Senators, who feared losing their power, as Booth feared losing the Confederacy. Booth always considered Lincoln the tyrant, hence his proclamation ‘sic simper tyrannis’ (be it ever to tyrants) when he jumped to the stage after shooting Lincoln.

Caesar’s Senators, Brutus and Cassius among them, conspired to stab Caesar to death on an appointed day. Booth recruited a group of like-minded disciples to aid him in his insane plot, at first to kidnap Lincoln, then to kill him.

By day, Booth was a Confederate spy and courier, taking dangerous missions so that his beloved South could fight the North in the war that tore the nation in two. But in this story, an even darker secret plagues him–he believes he’s the reincarnation of Brutus, the man who slew the tyrant Caesar, and Booth’s destiny in this life is to murder the tyrant who’s ravaged the South—Abraham Lincoln. In obeying the spirit of Brutus, Booth devises a plot to assassinate the tyrant.

I wrote it as a paranormal instead of a straight historical novel  because spirituality was extremely popular in 1865 and all throughout Victorian times. Mary Lincoln was a staunch spiritualist. So stricken with grief after the deaths of her boys Willie and Eddie, she hired mediums such as Nettie Maynard to visit the White House and hold séances in attempts to contact her boys from beyond the grave.

The extent of séances, table-tapping, Ouija boards, Tarot cards, and otherworldly activities in this era fit perfectly with the story I wanted to tell. We could never enter Booth’s head, but his insane behavior begs the question: was he truly haunted by a spirit who drove him to his heinous act that changed history forever?
Or was he simply insane?

“And I am Brutus, Marcus Brutus, I; Brutus, my country's friend; know me for Brutus!" Booth declared to the proud reflections in his three facing mirrors.
The center mirror clouded over. Puzzled, he leaned into it to peer closer. His  reflection faded as if the mirror were clear glass, and another human form took shape, becoming sharper as the mist faded. He was astonished to be looking into the face of a man whose eyes bored into his, pinning him with an unnerving stare. Booth took a step back, glancing to the left, then to the right, but his own reflections were moving right along with him. He focused once more on the stranger in the center, the Roman nose giving the weathered features distinction. He’d seen this face before, but where?
The head nodded and the hint of a pleased smile curled the thin lips. Without so much as a word, the figure faded into the mirror’s eternal depths, and Booth was once again looking at his own astonished face.
“Damn you! Who are you?” He pounded the mirror and it wavered, his image jerking back and forth with the moving glass.
Exasperated, he turned away.
“I’ll find out who you are if I die doing it.” He twirled around to face the mirror, seeing only his three perplexed reflections.