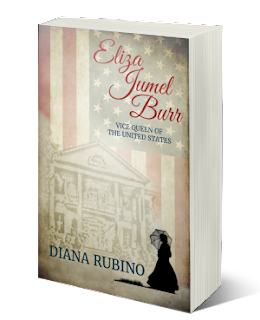 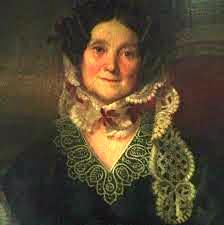 On Eliza and Stephen’s first trip to France together, the fallen and beaten Napoleon Bonaparte boarded Stephen’s brig the Eliza,seeking an American vessel to ensure his escape from the British. Stephen, in all seriousness, offered the Emperor a wine barrel to stow away in. The Emperor, haughtily put out when he realized Stephen wasn’t joking, accepted Eliza’s invitation to hide in their New York home, but never made it to the new world. However, he did give Eliza his yellow coach and other costly gifts, now on display in the Jumel Mansion. Stephen’s business connections afforded him and Eliza introduction to the upper echelons of  Paris society. She met King Louis XVIII, but he shunned her begging to let Stephen join court circles.

Back home, she resumed her love affair with Aaron, whose wife Theodosia had died of cancer. He was now Vice President, having lost the presidency to Thomas Jefferson. Eliza asked him to marry her, but he turned down her proposal. He just wasn’t ready for remarriage.

While tending to his farmlands, Stephen fell from a cart and died in Eliza’s arms two days later. She was brought up on murder charges which were dropped. A despondent Eliza once again turned to her true love, Aaron, back in New York at his law practice.
One evening, Aaron showed up at her doorstep with a minister in tow, the same Reverend Bogart who’d married him to his first wife Theodosia fifty years before. He proposed to Eliza on bended knee: “I give you my hand, Madame; my heart has long been yours.”
She finally became Mrs. Burr at age 56. Aaron was a robust and youthful 78.
He began to spend Eliza’s money recklessly, plowing through $13,000 within a few months. The bickering became grounds for divorce when a maid caught him in a compromising position with another woman. Brokenhearted, Eliza hired a lawyer Who handled family matters—including divorces. Who was this lawyer? Alexander Hamilton Jr.

The Morris-Jumel Mansion still stands in Harlem, New York City and is open to the public. 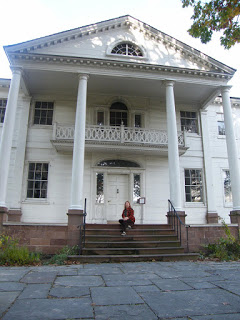 Me on the front steps of the Morris-Jumel Mansion
Posted by Diana Rubino at 6:26 AM