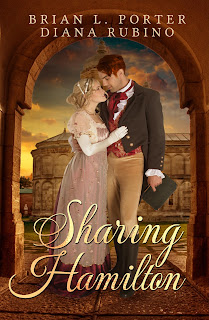 I'm delighted to announce that I just signed a contract for my new historical romantic thriller, SHARING HAMILTON, co-written with best selling author Brian Porter. It centers on the nation's first sex scandal in 1791 between Alexander Hamilton and the beautiful Maria Reynolds, whose con artist husband James blackmailed Hamilton. This became tabloid fodder of the time, known as "The Reynolds Affair."
My British author friend Brian Porter writes murder mysteries set in England. I needed him to add his skills on writing about the darker side of life to produce the subplot about a Jack the Ripper-type murderer prowling the nighttime streets of America's first capital, Philadelphia. The challenge was to take my completed manuscript and seamlessly add the subplot as though the whole book was written in one continuous stream.
SHARING HAMILTON is coming soon from Creativia Publishing and I'll post about it here. Stay tuned!
More on The Reynolds Affair