A Tradition of Christmas Past 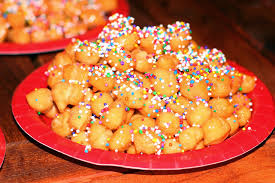 This tradition ended when my great grandmother (Grandma to everyone) passed away in 1988. She was the matriarch of the family, the mother of my grandfather. “Josie Red” as she was known in downtown Jersey City was way ahead of her time, as a bootlegger during Prohibition, a real estate tycoon, a small-time loan shark, and according to legend, Mayor Hague’s mistress.