Kris writes novels of suspense and romance with outdoor adventures and Southwestern landscapes. In The Dead Man’s Treasure, estranged relatives compete to reach a buried treasure by following a series of complex clues. In The Skeleton Canyon Treasure, sparks fly when reader favorites Camie and Tiger help a mysterious man track down his missing uncle. Whispers in the Dark features archaeology and intrigue among ancient Southwest ruins. What We Found is a mystery with strong romantic elements about a young woman who finds a murder victim in the woods. In Counterfeits, stolen Rembrandt paintings bring danger to a small New Mexico town.


Read excerpts at www.krisbock.com or visit her Amazon page. Sign up for Kris Bock newsletter for announcements of new books, sales, and more. 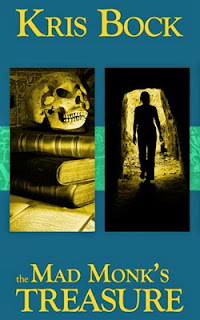 About The Mad Monk’s Treasure

A legendary treasure hunt in the dramatic – and deadly – New Mexico desert....
The Mad Monk’s Treasure is the first Southwest Treasure Hunters book, followed by The Dead Man’s Treasure. Each novel stands alone and is complete, with no cliffhangers. This contemporary romantic suspense series mixes action and adventure with sweet romance. The lost Victorio Peak treasure is the stuff of legends – a heretic Spanish priest’s gold mine, made richer by the spoils of bandits and an Apache raider.

When Erin, a shy history professor, uncovers a clue that may pinpoint the lost treasure cave, she prepares for adventure. But when a hit and run driver nearly kills her, she realizes she’s not the only one after the treasure. And is Drew, the handsome helicopter pilot who found her bleeding in a ditch, really a hero, or one of the enemy?

Erin isn’t sure she can trust Drew with her heart, but she’ll need his help to track down the treasure. She heads into the New Mexico wilderness with her brainy best friend Camie and a feisty orange cat. The wilderness holds its own dangers, from wild animals to sudden storms. Plus, the sinister men hunting Erin are determined to follow her all the way to the treasure, no matter where the twisted trail leads. Erin won’t give up an important historical find without a fight, but is she ready to risk her life—and her heart?

“The story has it all—action, romance, danger, intrigue, lost treasure, not to mention a sizzling relationship....”

“The action never stopped .... It was adventure and romance at its best.”

“I couldn’t put this book down. You’ll love it.”

Fans of Mary Stewart, Barbara Michaels, and Terry Odell will enjoy these stories of love in the wild, from a New Mexico Book Award-winning author.

Erin could hardly believe what she was seeing. Could this be it? After all this time waiting, searching, had she finally, finally, found what she was looking for?
She forced herself to sit back and take a deep breath. Don’t make assumptions. Don’t rush into things. She wanted to leap up and scream her excitement, but years of academic training held. Slow down, double-check everything, and make sure you are right!
She leaned forward and ran her fingers over the grainy photograph. With that one image, everything seemed to fall into place. This was the clue. It had to be.
She fumbled in her desk drawer for a magnifying glass and studied the symbols in the photo more closely. At a glance, they looked like your standard Indian petroglyphs. You could find them throughout the Southwest, tucked away in caves or scattered among boulder fields.
But this was different.
If she was right—and she had to be right—these symbols were a map. A map that could lead her to one of the greatest caches of buried treasure ever.
She reached for the phone. In a few seconds a voice said, “Yeah.” Erin could hear the sound of some tool on metal in the background.
“Camie? I found it!” 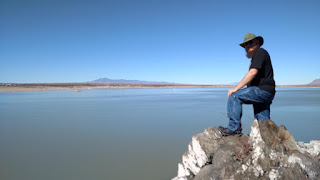 My husband and I always spend our anniversary weekend in Truth or Consequences, New Mexico. Although T or C is small, it has several good restaurants and many spa services. We like to stay at the Fire Water Lodge, where each room has its own tub fed by geothermal hot mineral water. Each room is different, and you can see the specifics for each room on their website. Fire Water is one of the more funky/less expensive lodges. You can also find high-end luxury lodging.

There’s not a ton to do in T or C – which is part of what makes it relaxing. You can wander the small town and poke around used bookstores and art galleries. Nearby Elephant Butte provides three short hiking trails as well as a ten-mile trail along the lake, if you’re feeling ambitious. You can also sit on the beach, fly a kite, watch birds, or fish. At night, be sure to look up at the sky – we prefer to do this from our Jacuzzi tub – at a dark sky filled with stars.

For more Southwest travel, visit my Southwest Armchair Traveler blog. Check out the Labels for posts on different parts of the state.