In her free time, she loves to travel, and spent several months living in a 14th century castle in the Netherlands. When not exploring the world, she likes dreaming up stories, eating spicy food, driving fast cars, and talking to strangers. 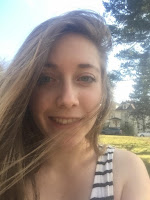 A DUEL OF HEARTS, Book One in
The Royal Rakes Collection 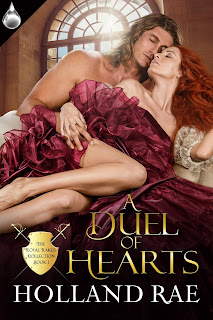 When Lady Mary Elizabeth Anne Paramour runs away from an unhappy engagement, her options are limited. Soon, she finds herself at the doorstep of a favored cousin's temporary home, the estate of the most debauched lord known to the aristocracy, Nathaniel Arlington. The charming and handsome Lord Arlington's perpetual house party is infamous across England, and fodder for instant disownment if Mary's prudish mother, Countess Helena, ever finds out where she is.
But Mary, with a rebellious streak of her own that led to a lifelong interest in fencing, comes to realize that maybe not everything is as it seems. Over late-night sword fighting and whiskey, she begins to develop an unlikely friendship with the lord, who might just have more behind the rakish facade than he lets most people believe. But just as Mary thinks their unusual friendship might turn to more, she finds herself facing the unexpected, something that might just ruin her chance at happiness forever.
Sneak Peak:

Cumbria, England, 18 March 1797
When Lady Mary Elizabeth Anne Paramour had been very young, her nanny had read her fairytales. From the very first, Lady Mary had soaked in tales of knights and dragons and quests, and the whole wonderful world of fantastical romance. She'd grown into her young womanhood, and while the words beautiful, kind, and lovely had all been whispered in the great ballrooms of the English aristocracy, Lady Mary had never let go of her childhood fascination with true love, knights in shining armor, and princesses to be rescued by their heart's mate.
Surely, growing up with her mother, she'd never voiced these particular fantasies aloud. Countess Helena Eleanor Blanche Paramour would not have taken lightly to the notion of fairies and mermaids and true love, and most especially not in regards to her only daughter. The countess herself had met Mary's father only three times before the day of their wedding, which had been the talk of the tonne, naturally, and she made a point of reminding Mary, as often as possible, that one can be a dutiful and loving wife to a man without having to ever get to know him. As it stood, Count Jonathan Paramour and his wife were rarely seen together in public or in private, and to the best of Mary's knowledge that had suited them both just fine.

But that simply wasn't the kind of marriage she wanted for herself, regardless of her mother's insistence on the matter. Countess Helena had preached many things to Mary throughout her life, nearly of them relating back to themes of piety, conservative values, and the ability to retain an impeccable reputation. And for nearly twenty-three years Mary had abided by those rules of her mother's home to the very best of her ability. She never spoke out of turn, never got involved in illicit relations with the local farmers' sons, and never once voiced the opinion that she might like to perhaps marry for love. Countess Helena would have sent her away had those impetuous words ever manifested outside of Mary's own mind.

That wasn't to say that Lady Mary Elizabeth Anne Paramour was entirely well-mannered all of the time. Rather, she was particularly well-versed in playing the attentive and perfectly bred daughter of a countess, and utterly fantastic at pretending she wasn't.

Though her fascination with fairytales had started young, she had only grown into them as she aged. By the time she was old enough to understand that life didn't happen such as the stories had said it, Mary had also learned that there were some elements that could be practiced, if one only knew how.

His name had been Jean-Paul San Martin, and he was known as one of the greatest swordfighters that the continent had ever produced—a birthday gift for her eldest brother, Malcolm. She had been barely older than twelve, and she had watched them duel, watched the dance of feet and fingers and knowing eyes, as Jean-Paul taught Malcolm with all the finesse that Mary had known she'd never be privy to. Eventually, Lady Helena had learned of her escapades, and even the view through the fencing room keyhole had been blocked from her.

But luck, though Mary often considered the possibility of white magic, even if she had never voiced the thought aloud, had been on her side. Some weeks into Jean-Paul's residency at the estate, she'd stumbled upon him and a scullery maid in the first floor hall closet. Knowing her mother's sense of propriety as she did, even at that age, Mary had promised to keep the man's secret—for a price.

It was a small act of rebellion, in the grand manner of things, but it kept Mary's head clear, and allowed her the vaguest hint of individuality, which was more than could be said for most of the women who frequented the society parties of which her mother was so fond.

None of that, however, explained exactly what she was doing on the doorstep of the most debauched kin of royalty known to the tonne. Truly, Helena would have herself heart palpitations at the very mention of the man's name—Lord Nathaniel Arlington. He was beyond infamous, beyond scandalous. By name, Lord Arlington and his raucous, depraved house parties were likely more myth than fact, but she would find out the truth on that matter soon enough. If she managed to keep her courage about her long enough to get through the front door.

At that exact moment a young butler opened said door. He didn't seem the least bit fazed by her lack of formal invitation or earlier notice, and simply welcomed her into the house, introducing himself as Harker before taking her riding coat. She handed it to him, pleased to finally be out of the carriage and hopeful, so desperately hopeful, for a friendly ear.

"I am Lady Mary Elizabeth," she began, cutting herself off before revealing her family name, not that it would have likely made much of a difference. "I've been informed that Lady Amalie Bronwyn is currently residing here."

Purchase A DUEL OF HEARTS