I'm so glad so many of my fellow authors write the kinds of books I devour. I'd be writing a lot more of these books if there were 72 hours in the day! Read about THE SAXON BRIDE below.
My guest is Ashley York who's also hosting me today on her blog, www.ashleyyorkauthor.com
About Ashley:

Always an avid romance reader herself, Ashley York enjoys bringing history to life through vibrant and meaningful characters, writing historical romance novels full of passion and intrigue set in the 11th and 12th century British Isles. Her latest release, The Saxon Bride, is the first in The Norman Conquest series.
When she is not writing, talking about writing, or thinking about writing, Ashley relaxes with visits to the local pubs listening to live Celtic tunes. She lives in southern New England with her husband and 3 very spoiled animals.


About THE SAXON BRIDE:
In war torn England the battle lines between Saxon and Norman are clearly drawn. 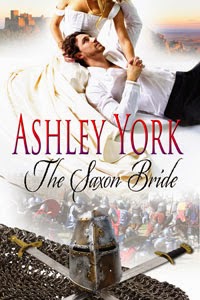 Rowena Godwinson, the sole remaining member of the defeated royal family, stands proudly against the Normans that would trample them underfoot. Her nobility and grace,  however, make her an ideal pawn in King William’s play for power with the Saxon people. When he decrees she marry a powerful Norman knight, her subjugation appears to be complete. Can she hold firm to her Saxon heritage and refuse to give in to his advances?

John of Normandy is rewarded for his service and loyalty with land, titles and a Saxon beauty for a bride. John balks at the marriage, driven by the secret guilt of knowing Rowena's father died by his sword.

As their people look to them for guidance and peace, can John and Rowena find a love that unites all of England?

Her eyes narrowed at use of the title.

"...you will not allow men into your bedchamber. Other than me, that is."

A little shiver passed through her at the idea of him coming to her in the middle of the night. She could again feel his fingers caressing her. Perhaps he had indeed returned to be her husband in truth. The possibility excited her.

Arthur had followed her and even taken her in his arms to comfort her. In the past she had welcomed the feel of his arms around her, seldom as that happened, but she was already different. His arms no longer felt right around her. She had tried to tell him he could not be in her chamber, it wasn't seemly. He had looked so hurt.

"Do you not understand  me, wife?" John said.

The title bristled her. "Yes, husband, I understand you fine."

The use of titles did not make it any more true. Men always thought it did. They were wrong. Turning to him, she felt her cheeks grow hot as he caressed her ever so slowly with his eyes, finally resting on her face before her spoke again.

"Husband I will be soon enough."

His answer told her he didn't miss her meaning. He stood suddenly, and the fire silhouetting his large frame caused her breath to catch at his imposing size. From his powerful legs, slightly parted and ready for attack, to his solid torso, ready to receive the assault, to his burly arms more than willing to instigate the encounter. This was certainly no complacent lord of the manor; this was a well-honed fighting machine. Rowena was confused when she realized her own longing to touch him. His brown hair looked soft and the shadow of a beard around his chin caused her hand to itch for the touch of both.

Her breath quickened when he stepped toward her, his eyes piercing her own.

He stopped just short of touching her but that now familiar heat reached out to her.

"You are mine and only mine."