Meet Mystery Author Paty Jager, Read About Her New Title and Puzzling out a Murder Mystery

Paty hosted me last week on her blog Ladies of Mystery featuring my historical mysteries. Now, to return the favor, she's my guest!

Paty is an award-winning author of 46 novels, 8 novellas, and numerous anthologies of murder mystery and western romance. All her work has Western or Native American elements in them along with hints of humor and engaging characters. Paty and her husband raise alfalfa hay in rural eastern Oregon. Riding horses and battling rattlesnakes, she not only writes the western lifestyle, she lives it. This is what Mysteries Etc says about her Shandra Higheagle mystery series: “Mystery, romance, small town, and Native American heritage combine to make a compelling read.”

Puzzling out a Murder Mystery

At book #6 in my Shandra Higheagle Mystery series, my daughters both asked me how long I planned to make the series. At the time, I said, until I can’t come up with anymore ideas or the readers start complaining the books/characters have soured.

I just released book 15 in the series. Capricious Demise has my amateur sleuth, Shandra Higheagle, a Native American potter beginning the book with a dream about two children. A boy and a girl. 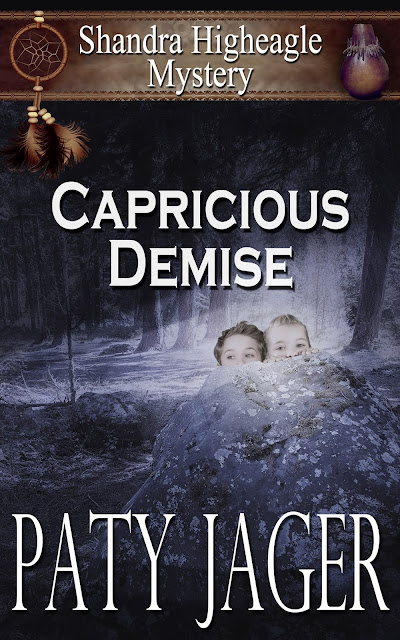 To get you up to speed if you haven’t read the series, Shandra was estranged from her Native American family on her father’s side after he died. As an adult, she reconnects with that family at her paternal grandmother’s funeral. And ever since the funeral, her grandmother comes to her in dreams, giving her clues that help Shandra and Ryan Greer, a detective with the Weippe County Sherriff’s Department in Idaho.

When I began what I call my stewing and brewing process for this book, I had the intention of bringing children into their lives. It wasn’t until I had a scene with one of the secondary characters play out in my head, that I realized the children would become orphaned when their parents were killed.

For me the best part of writing this series and coming up with this particular book, is seeing the story arc of not only the main characters but the secondary characters as well. The secondary characters that are brought to life in the first book, Double Duplicity, (which is free at all ebook vendors) all have had lives that continue to move through life, not just show up in different books because I needed a person. I have built a secondary cast of characters who, whether Shandra is at home in Huckleberry or visiting relatives on the Colville Reservation in Washington, will have a growth in their lives from the last book they were in.

For this book, I had to delve into one of the parts of murder I find fascinating—motive. I won’t say too much because I don’t want to give the killer away. This particular book, I started with the dream, the children, two deaths by different means, and then built my motive from my title.

Each book I have a different path that leads me to the motive. Sometimes it’s the motive I come up with first and build the rest of the story around it. Other times it’s the deceased I have first and the motive comes along as I build the story. I believe that is why I enjoy writing murder mystery books. I have as much fun piecing the story together like a puzzle as I have when I read a mystery and try to puzzle out who the killer is.

What is your favorite thing about writing or reading mystery books?

Shandra Higheagle’s deceased Grandmother enters Shandra’s dream, showing her two lost children. Her grandmother never comes to her dreams unless there is a murder to solve. But whose? The children? Or someone related to them?

Ryan is called out to a suicide, that isn’t. While contacting next of kin, he finds the victim’s husband also murdered and their two children missing.

Using her dreams, Shandra helps locate the missing twins whom they take into their home as foster children. The hunt for the reason the parents were murdered becomes urgent when the children reveal they may have seen the killer.