About Patricia, Confessions of a Non-Gardener

When it comes to plants, I have what’s known as a black thumb. I can’t make anything grow, either indoors or outside. I’m also incapable of identifying anything other than the most basic species. So when Dingbat Publishing put out a call for a Christmas regency series called Christmas Bouquet, I was skeptical. All stories had to feature flowers somehow. What were the chances that I, lacking any knowledge of plants, could write a story fitting those guidelines.

For inspiration, I channeled my memories of my paternal grandmother. Grandma lived with us while my brothers and I grew up, and I remember how she always had a garden full of colorful blooms. The flowers not only added color, but their fragrance calmed me after a busy day at school. Once I began tapping into those memories, the ideas started flowing, and I soon had my main characters. James is a landscape architect, but when he’s in the city he has a terrible sense of direction. Grandma would have loved guiding him along, giving him advice, and applauding the goodness of his heart. And since Grandma was crafty, always knitting, sewing, or painting, she would have loved Selina, too.

Grandma’s been gone over thirty-five years, but I still miss her. Writing about one of her favorite hobbies was a way for me to have her by my side again for a little while. 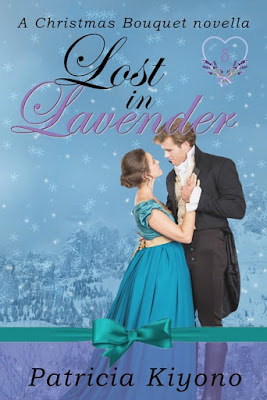 About LOST IN LAVENDER

Selina Davison once enjoyed life as a countess, but when tragedy struck, she learned to take care of herself. Thanks to her skill creating hats adorned with realistic silk flowers, she’s built a successful business as a milliner. When a handsome gentleman stumbles into her shop asking for directions, she remembers and yearns for the joy of having someone to share life’s ups and downs.

As the second son of an earl, James Benton could enjoy his social privileges, but the concerns of the gentry hold no interest for him. He’s much happier to be outdoors, tending to his plants, which never judge him. His peerage connections help him secure the position as landscape architect for the winter garden in Highgate, but no one warned him of how complicated the personalities involved would make the job.

He inwardly cursed at his inability to follow simple directions. He’d managed to graduate from Oxford, finding his classes with the help of his classmates. Yet he couldn’t wrap his mind around the difference between left and right. He stepped aside to let the people behind him pass, and looked back. Perhaps he should try to find his way back to the bookstore, but he didn’t see the shop’s sign. Had he made a turn or two since leaving the shop? Perhaps the gentleman across the street could help him—
“Look out!” A shout pierced through his thoughts and he froze, stopping just in time to let a carriage pass him by.
His mother and sister would have chided him endlessly about his near-miss. Fortunately, he was alone, though he scolded himself for his carelessness.
He glanced to each side before crossing the busy street. Satisfied he’d be safe this time, he stepped off the walkway. But his eyes refused to focus on the gentleman he’d intended to ask for help. Instead, he spied the most exquisite flowers he’d ever seen. A cluster of roses, so perfect, so life-like, they had to be real. But the flowers were attached to a woman’s bonnet. Flowers as decorations on bonnets weren’t particularly unusual, but these were so flawless he had to take a closer look. If they were real, he had to find out where they’d come from. If they were hand-made, he needed to discover the material and compliment the artist.
And so, being the horticulturist he was, he followed the hat.

Purchase LOST IN LAVENDER from Amazon