Jerome, a master of lyrical farce and literary ventriloquism, published his first novel in 1964.
A columnist for Charlie Hebdo and the author of Johnny One-Eye, The Secret Life of Emily Dickinson, and dozens of other acclaimed novels and nonfiction works, he lives in New York.
Read on for my review of his latest title and check in next Tuesday for my in-depth interview
with Jerome. 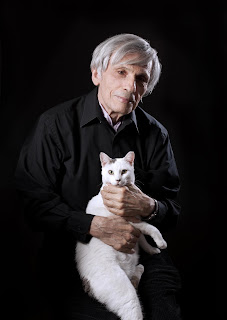 Jerome recently released THE PERILOUS ADVENTURES OF THE COWBOY KING: A NOVEL OF TEDDY ROOSEVELT AND HIS TIMES. When Rachel Gul of Over the River Public Relations asked me to host Jerome featuring this book, I knew this was no mere coincidence, because at this moment I'm writing my current biographical novel: FIRST LADY, FIRST DAUGHTER about Edith and Alice Roosevelt, Theodore's wife and oldest daughter.

Jerome is giving away copies of this book and his previous historical novel I AM ABRAHAM about Abraham Lincoln. Please Email me at diana@dianarubino.com if you'd like to enter to win. I will give a copies of the books to the first and second persons who can tell me the three historical figures they'd most want to meet. 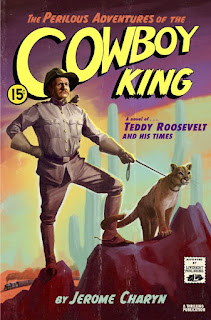 I was happy to read and review the book:


What Really Made Teddy (though he hated that nickname) Tick

Theodore was an author, politician, naturalist, and athlete, but he was a cowboy at heart. It always amazed me how a New York Knickerbocker aristocrat could adapt so naturally to the badlands, but Theodore took to it like he’d been born there. Jerome Charyn tells Theodore’s story as a memoir in first person, and his voice is not at all stiff or formal, as in the style of Theodore’s day and age. He tells us of his early life in Manhattan as a sickly asthmatic child whose doctors didn’t give him much time to live because of an alleged weak heart, and he defied them at every turn, taking up vigorous exercise, wrestling, and became fit and trim.

We learn about his courtship and first marriage to Boston belle Alice Lee, who tragically died two days after giving birth to their daughter Alice, and to add to his grief, his mother died in the same house on the same day. He went against the custom of the time to court and marry his childhood sweetheart Edith Carow (widowers never remarried).

He doesn’t go into great detail about his career as Assemblyman, Police Commissioner, governor of New York, Ass’t Secretary of the Navy, authorship of his many books, or having the Vice Presidency thrust upon him and subsequently the presidency after McKinley’s assassination, but tells us enough about it to let us know he’s still trying to find where his destiny lies. The bulk of the story is written about his exploits—the USS Maine, making a courtesy visit, was blown up in Havana Harbor and a few hundred Americans were killed. But President McKinley refused to declare war at first. A few days later, McKinley sent a declaration of war to Congress. Theodore wanted to serve as Lieutenant Colonel. His first U.S. volunteer cavalry became his Rough Riders, made up of a wide variety of men, cowboys, farmers, Indians, Mexicans, elites from the Ivy League colleges, socialites, and his brother-in-law. He had no trouble getting men to join. They flocked to him. His charge up San Juan Hill made him a hero. So, among all his other attributes, he was a military man—one of the most well-rounded figures in American history.

I recommend this book to anyone who’s already familiar with Roosevelt as president, but not with his life leading up to it.

Purchase THE PERILOUS ADVENTURES on Amazon