I have lived in the UK all my life, but now my son lives in Thailand, I keep finding excuses to spend time over there.


I have worked with the Probation Service, the Police Authority, as a charity boss and as a freelance child protection consultant. I currently sit on the boards of two charities: one that runs assessment centres for families experiencing problems, and one providing services for the elderly (well you've got to think ahead)...


I am married with one grown up son.


I wanted to be a writer from about the age of eight, as well as being an actress, a mountaineer and having ten children.  I have never acted - not even as an amateur (though I do sell tickets and programmes at the local community theatre); my ambitions to be a mountaineer faded after a scrap with an ice sheet in North Wales in my teens which the ice sheet won; and somehow I found one child was quite enough...


I did though keep writing, mostly work related stuff but more and more fiction over the past few years.


'And Alex Still has Acne' is my first published novel, but I have had several short stories published, and a growing number of plays performed by amateur groups.


When not writing I enjoy reading and going to the theatre.


I try to keep fit by swimming and racing my cairn terrier around the park. He usually beats me, though his enthusiasm for long walks wanes somewhat on dark and icy winter mornings. Can't say I'm sorry!

An Interview With Margaret

What is the title of your latest book? What is it about? 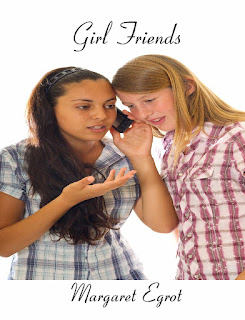 My latest YA novel, Girl Friends, was published by Solstice in May 2016. Essentially a story about the friendship between two girls and their search for boyfriends, it also tackles child sexual exploitation, and how easy it is for a vulnerable girl to get sucked into this. And how hard it is, even for a best friend, to realise what is happening, or do anything about it. Fortunately Courtney is a resourceful young lady and, with help from new friends, realises what is happening in the nick of time.

What are the most challenging aspects of being a writer? And the most rewarding?
I find sticking with my intended plot outline quite a challenge – the characters often decide to do something completely different. Usually, unless it would mean completely re-writing the book (and that has happened!) I go with the flow and tweak the plot outline accordingly.
My most rewarding experience was when my son read the first draft of my first published YA novel, And Alex Still has Acne – and said it was quite good! Praise indeed from him; he wouldn’t have hesitated to tell his mother she was writing rubbish if that was what he thought. He did make a few useful suggestions as well, after all he had been a teenager a lot more recently than I had.

What is your top tip for an aspiring writer?
Read plenty of novels, especially from the genre you want to write in. Read for pleasure, but then think about what worked / didn’t work for you in that particular book before you move onto the next one. Write for pleasure too. Try your very best and don’t expect to make a fortune.

What are you working on at the moment?
I have a short play on at a local festival, so I’m working with the cast and director on this at the moment. I have a short story appearing in a Solstice anthology, Realms of Fantastic Stories, on the 16th September, and a short story appearing in a Christmas anthology, Festive Treats, to be published in a couple of months by a Birmingham based group of writers.
For the past year or so I have been working on a series of short stories using female characters from Shakespeare’s plays – but not as they appear on stage! Solstice has already published a few of these and my story in the latest anthology, The Ghost Queen, is based on Hermione in The Winter’s Tale.

What do you like to read?
I will read almost anything from cereal packets to dictionaries rather than sit and do nothing. I like the classics (Jane Austen, George Eliot) but will also read new novels (Anne Tyler – A Spool of Blue Thread, Gillian Flynn - Gone Girl). I like non-fiction too and have not long read two books by Bill Bryson: A Short History of Nearly Everything and Mother Tongue. I love the way he conveys so much information with such a light touch. I have just started to read Francis Wheen’s How Mumbo-Jumbo Conquered the World. I enjoy reading books and articles about the origin of words and language and often write short articles about these on my blog www.writingandbreathing.wordpress.com