I found Kathryn by accident on Triberr--I only go there once a day, but for some reason I kept that tab open, so I looked it over again...I read her post, amazed that she's on the Cape, then saw she's a Wild Rose Press author!

She mentioned the spooky, but very fun ghost tour in Barnstable on the Cape, starting at the oldest wooden jail in the U.S.--and we both wrote about that tour in our books--in my latest time travel, DARK BREW, and she wrote about it in HAUNTED SOULS.

Meet Kathryn, and check out her passionate romance with a paranormal twist!

Kathryn spends a great deal of time in her fictional world, where mundane chores don’t exist and daily life involves steamy romance, dangerous secrets, and spooky suspense.  Kathryn writes contemporary romance spiked with mysterious hauntings as well as YA paranormal romance filled with forbidden love.  Her novels are award-winning #1 Amazon Bestsellers and RomCon Reader Rated picks.  When she’s not reading or writing, Kathryn spends her time catching up on those mundane chores, driving kids around, and teaching writing classes. Two of her ghost story/romance titles, Gull Harbor and Haunted Souls, are set on beautiful Cape Cod, where she lives with her husband, their two sons, and a number of rescued pets. 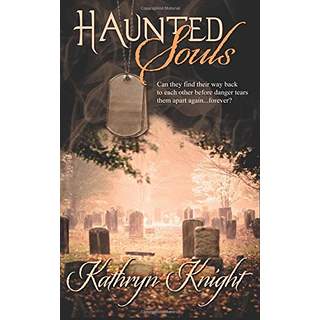 Four years ago, Emily Shea and Staff Sergeant Brett Leeds agreed to part with no strings attached. Sparks flew during their brief affair, but fate intervened, sending Brett overseas. When an unexpected pregnancy derailed Emily’s own plans, her attempts to locate Brett were soon overwhelmed by the challenges of single motherhood. Now, Brett has returned home, and Emily is forced to share her secret.

Despite feeling betrayed, Brett is determined to forge a relationship with their son, Tyler. As the former lovers battle both their inner demons and their mutual desire, another presence enters their lives—Tyler’s imaginary friend.

Soon, however, the chilling evidence points to a different conclusion: a ghost has formed a dangerous connection with their son. Emily’s attempts to help both a lost soul and a friend in need spiral toward a deadly confrontation, and Brett must race to save Emily before he loses her again—forever.