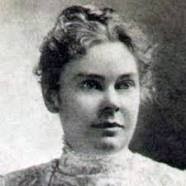 We know the children's rhyme--Lizzie Borden took an axe and gave her father forty whacks. When she saw what she had done, she gave her mother forty-one. Well, it wasn't that many whacks, and we'll never know if it was Lizzie who killed Andrew and Abby Borden in 1883 in their Fall River, Massachusetts home. But because of crummy weather, I finally got to tour the house--I've been wanting to go there for years! We planned to golf last... Sunday, April 24, but the weather on Cape Cod wasn't cooperating. Fall River is about 45 minutes from the Cape, so I thought I'd take a chance and see if the Lizzie house was open for tours. I doubted it, being a Sunday. But lo & behold, it's open 7 days a week, with tours every hour. We hi-tailed it to Fall River in the rain and found the house after the GPS told us to go down a few one-way streets we couldn't navigate. The house is now a B&B, and there's a more-than-one-year waiting list to stay in the room where Lizzie's stepmother was found dead next to the bed, badly butchered. Her father Andrew's body was found on the couch in the sitting room. Lizzie went to trial and the all-male jury acquitted her in less than an hour. To this day it remains unsolved, as she had no alibi, she hated her stepmother, and--this isn't proven, but it's a theory--her father had sexually abused her and her sister. Lizzie and her sister Emma split the huge inheritance. No alibi, but a motive, maybe?
About the house--the rooms

Lizzie has a Facebook page, and she's the subject of numerous books and movies. Elizabeth Montgomery starred as Lizzie in a movie The Legend of Lizzie Borden and a gown Elizabeth wore in the movie is on display in the house.