Arthurian Author and Friend Kim Headlee is my Guest--Read About Raging Sea: Reckonings

I always enjoy hosting Kim as much as I enjoy her books. I fell in love with the play Camelot at age 3, when my mother went to see it on Broadway, starring Richard Burton and Julie Andrews. The soundtrack album played in my house constantly. The whole Arthurian legend fascinated me, and still does.

Kim sent me 3 excerpts of Raging Sea: Reckonings: a PG version, PG-13, and R-rated. I went with the PG-13, right in the middle. If you'd like to see the R version, let me know!

Kim lives on a farm in southwestern Virginia with her family, cats, goats, Great Pyrenees goat guards, and assorted wildlife. People and creatures come and go, but the cave and the 250-year-old house ruins—the latter having been occupied as recently as the mid-twentieth century—seem to be sticking around for a while yet. She has been an award-winning novelist since 1999 (Dawnflight 1st edition, Sonnet Books, Simon & Schuster) and has been studying the Arthurian Legends for nigh on half a century. 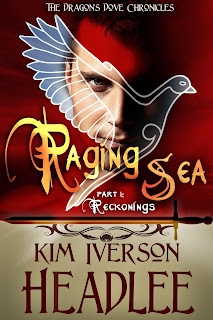 Raging Sea: Reckonings can be read standalone, but the reader will be better informed if s/he has read Dawnflight (book 1; Kindle worldwide link http://getBook.at/Dawnflight_2ed_by_KIH_Kindle ) and particularly Morning’s Journey (book 2; Kindle worldwide link http://getBook.at/Mornings_Journey_by_KIH_Kindle ) first.
SYNOPSIS
Those who aspire to greatness must first learn servanthood.
Stripped of kin, clan, country, and even his identity for having failed the most important woman in his life and her infant son, Angusel begins the arduous task of rebuilding his life and reclaiming his honor. The path he treads is fraught with uncomfortable revelations, unexpected reconciliations… and unavoidable reckonings.
Purchase Raging Sea: Reckonings from
(Kindle Unlimited only)
EXCERPT (PG-13)
Gull gave Angusel a measuring stare, glanced at the skies—which had remained calm, and the temperature was behaving itself for once—and reached a decision. “Elian, the wood can keep. Our wee lion cub needs a woman. So do I, truth be told.” He picked up his sword.
Over Angusel’s embarrassed, “What!” soared Elian’s hearty laughter. “I suppose you know just the place,” said the centurion with a grin.
“Of course. Don’t you?” Gull shot back. When he got no response, he continued, “How long has it been for ye, auld boar?”
Elian’s grin soured. He pivoted on his wooden leg and stomped inside the cottage. Without looking back he said, “None of your cac-licking business. Take him, then. Just don’t be all day about it.” The words faded with distance until the last few were almost inaudible.
FOLLOW KIM
Posted by Diana Rubino at 12:00 AM