Her manuscript won Honorable Mention in the Louisiana Romance Writers 2011 Contest and was a finalist in the Daphne Du Maurier Kiss of Death Contest at the National Romance Writer’s 2012 Conference. In the l980s she wrote two plays that were performed locally: Song of Susanna about the life of Susanna Wesley, mother of John Wesley and Stede Bonnet the Gentlemen Pirate.
Praise for Katherine McDermott


She also received Honorable Mention Inspirational Romance for another one of her manuscripts in the 2013 Great Expectations Contest by the North Texas chapter of Romance Writers of America. 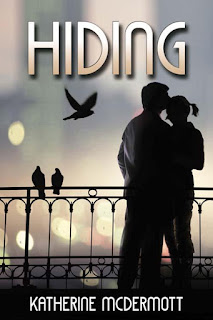 About HIDING
Teresa Worthington flees an abusive relationship and moves to Paris where she hope to pursue a career in art. Distrustful of men, she avoids them until the thoughtful and charming, Serge Gervais, the concierge at the hotel where she is staying, slowly wins her over. Then Alex finds her and posing as a homeless vagrant, begins a series of harassing incidents that threaten both Teresa and Serge. When Alex sets the hotel on fire and abducts Teresa into the Paris catacombs, Serge is desperate to find her. Will he locate her in time?
An excerpt from HIDING
Alex illuminated the crypt
with his light, and Teresa tried to interpret what she saw: uneven walls, a doorway surrounded by orbs, a floor littered with dried reeds. No, they weren’t reeds; they were bones. And the orbs were skulls! The catacombs! Her heart pounded in her chest like a jackhammer. Alex had withdrawn his knife. The blade glittered in the dim light of the torch which cast luminous shadows on the walls. What better place to kill someone? What was another set of bones among the many? Lord, as you helped the Christians long ago who met secretly in catacombs, help me.
An interview with Kim
Why I Wrote HIDING
Unfortunately, many women in modern society experience dating abuse as does Teresa Worthington in Hiding. Teresa learns to stand up for herself and gain independence by successfully pursuing a talent for painting. The idea for the story literally started with a “blank canvas” the brick and stucco back wall of a courtyard behind a Parisian hotel. This wall just tempted the imagination and invited creativity.
Because, like my character, I also like to paint murals, I wanted to pursue the idea of creating beauty out of bare bricks.
More about Kim:
Tell me three words that describe yourself starting with A, B, and C.
Artistic, brainy, corny
What are your three favorite things?
My husband, my grandchildren, my kids and yes, in that order, sorry kids : (
Are you self- published or with a publishing company (if so, which one?)?
Both. I have two children’s books that are self- published: Les Petits Gardes a picture book and The Underwear Tree, a chapter book primarily for girls.
Margie Clary and I wrote The South Carolina Lighthouses published by Arcadia Publishing and All Work, All Play is a book of actitivities for career counselors published by Marco.
What for you is the best part of writing? What is the worst?
The best part is getting into another world and another person’s mind.  I especially like doing research on places I have not been. With the internet it’s like taking a mini-vacation on the web.  The worst part is editing and rewriting. You better really like your story because before you finish, you will have read it over and over and over . . .
Is there a process you stick to, or do you just write as it hits you?
I had to learn to write anywhere anytime, the doctor’s waiting room, jotting down an idea on a napkin at a restaurant, etc. Life is so hectic that you have to use idle minutes to accomplish anything.
Was there any particular inspiration for your characters or story?
The inspiration for Hiding was a real hotel in Paris with a courtyard that was just begging for a mural.
How much is your character like you?
Somewhat, we both enjoy art and painting. We both like to travel. But fortunately, I have not experienced an abusive boyfriend though in my years as a high school guidance counselor I did hear about them from others.
Music is a big influence on my writing. I have certain songs that inspire each chapter, or the whole book.
What helps to inspire you?
I like music as well and your idea is intriguing. But no, I did not have specific songs though Phantom of the Opera certainly resonates in parts of my story. I like ballroom dance so I did throw in some tango and waltz.
What’s the one thing you would do if you could be your character for a day?
Enjoy those Alpine views in Breil sur Roya
What is the ultimate goal you have for your career?
Just want to keep writing. I am challenging myself right now with a historical romance word count 70,000.  That’s almost twice as long as Hiding, but I do love history.
Describe your perfect day
Leisurely breakfast with good coffee, teaching a freshman English class at Trident Technical College, working on a novel, seeing my grandkids and a little painting after supper. I find that when I am stymied writing and I go paint for a while, the writer’s block lifts.
As the holidays approach, what traditions do you have?
I like to sing in the church choir and make gingerbread houses with my grandchildren. We go to candlelight Christmas Eve service.
Will there be more books in your series, or can you tell us about any previous books?
Not with the same characters. Wild Rose is currently looking at Dead Right, another suspense novel set totally in Charleston. It involves and female assistant medical examiner and a serial killer.
When not writing, what can you be found doing?
Grading papers, cleaning house, gardening.
Favorite item of clothing in your closet?
I guess my bathing suit, not because of how I look in it, but because I really like to swim.
If you could spend the day with any celebrity, who would it be?
I think Tom Hanks would be fun.
Favorite writer, book?
Oh man, way to many. To Kill a Mockingbird, Pride and Prejudice, Gray Mountain. I really like court cases.
When writing, which do you prefer to write with, computer or paper and pen?
Both and whatever is handy at the moment!
Contact Kim