Meet Screenwriter/Author Kim Headlee (and read about other output of the maze of twisty passages (all different) otherwise known as her brain.)

I always enjoy hosting Kim, talking with her about various topics (she's a computer whiz-bang) and reading her books. Kim is my guest this week. Entertaining as always!

I read SNOW IN JULY and reviewed it on Amazon

If you don't already know Kim, here's a bit about her:

I live on a farm in southwestern Virginia with my family, cats, goats, Great Pyrenees goat guards, and assorted wildlife. People & creatures come and go, but the cave and the 250-year-old house ruins -- the latter having been occupied as recently as the mid-20th century -- seem to be sticking around for a while yet.
I am a Seattle native (when I used to live in the Metro DC area, I loved telling people I was from "the other Washington") and a direct descendent of 20th century Russian nobility. My paternal grandmother was a childhood friend of the doomed Grand Duchess Anastasia, and the romantic yet tragic story of how Lydia escaped Communist Russia with the aid of her American husband will most certainly one day fuel one of my novels. Another novel in the queue will involve my husband's ancestor, the 7th-century proto-Viking king of the Swedish colony in Russia.
For the time being, however, I have plenty of work to do in creating my projected 8-book Arthurian series, The Dragon's Dove Chronicles. 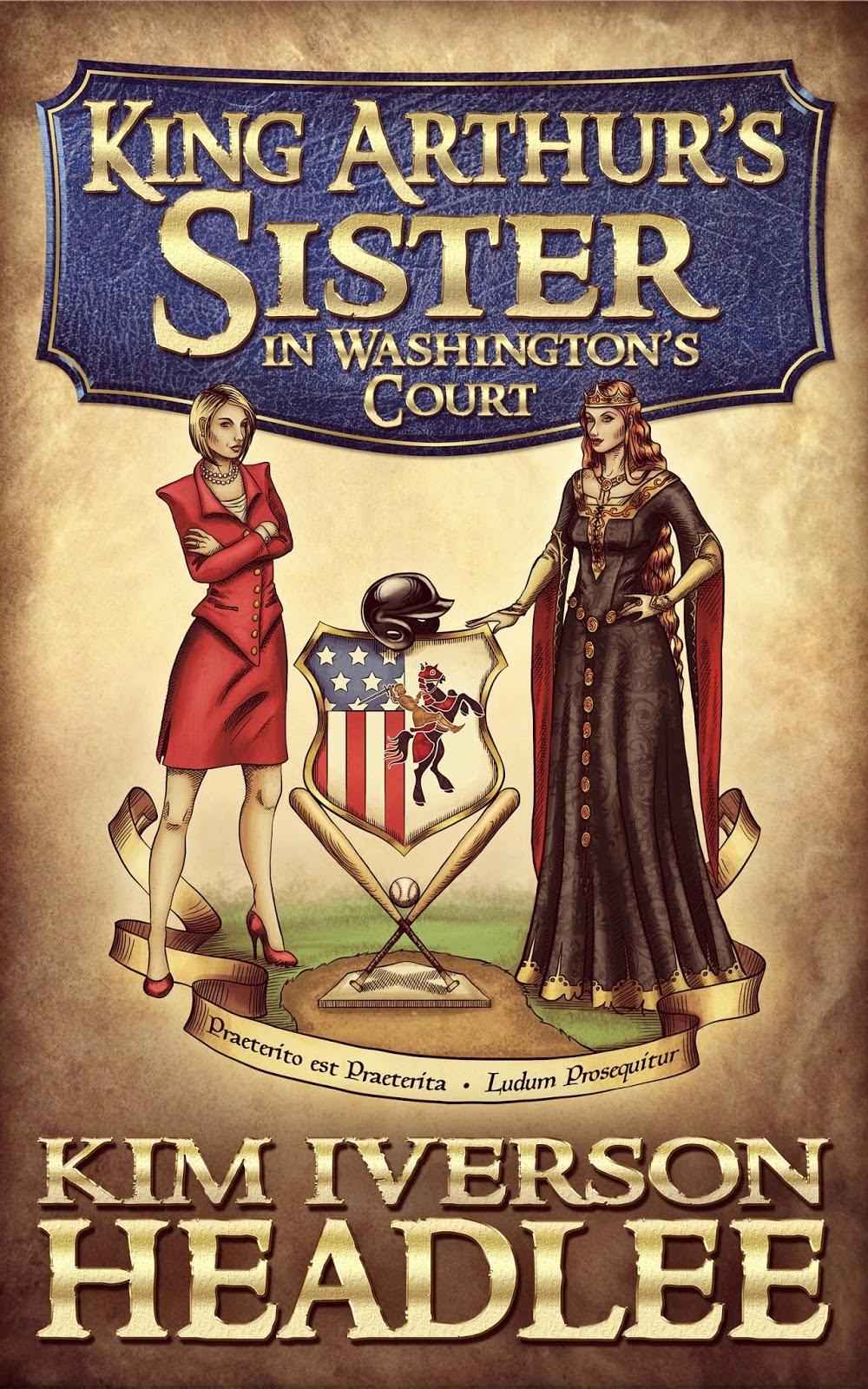 Read about KASIWC and an excerpt of the screenplay:

Morgan le Fay, 6th-century Queen of Gore and the only major character not killed off by Mark Twain in A Connecticut Yankee in King Arthur’s Court, vows revenge upon the Yankee Hank Morgan. She casts a spell to take her to 1879 Connecticut so she may waylay Sir Boss before he can travel back in time to destroy her world. But the spell misses by 300 miles and 200 years, landing her in the Washington, D.C., of 2079, replete with flying limousines, hovering office buildings, virtual-reality television, and sundry other technological marvels.

Whatever is a time-displaced queen of magic and minions to do? Why, rebuild her kingdom, of course—two kingdoms, in fact: as Campaign Boss for the reelection of American President Malory Beckham Hinton, and as owner of the London Knights world-champion baseball franchise.

SCREENPLAY EXCERPT
Adapted from Chapter XI: The Queen in Search of a Baseball Club
King Arthur’s Sister in Washington’s Court
by Mark Twain
as channeled by Kim Iverson Headlee

QUEEN MORGAN
It does so satisfy my soul to own
some Knights once again.

QUEEN MORGAN
Evil wench! Have you not enough
work searching for another man I
might hire as general manager? The
team trustees hired the last one,
and I do not trust them to avoid
making another mistake. The MLB
will release the sale details soon
enough. Let us say it was a
mountain of treasure.

CLARICE
Knights’ colors; of course that one
must go with you.

QUEEN MORGAN
I shall miss you, Clarice. Yet you
shall oversee my DC office well.
I have seen it.

CLARICE
I’ll look out for the President for
you, I promise.

QUEEN MORGAN
I appreciate that. President Malory
has become as a sister to me...

Queen Morgan holds up another dress, a sexy little black one.

CLARICE
Please tell me about him.

CLARICE
I think about someone now and then,
too-- David, the man who didn’t
return from the mission to extract
your brother. He never knew how I
felt about him.

QUEEN MORGAN
The monk you mentioned the day we
met... I am sorry. My lover’s name
is-- was Sir Accolon.

Queen Morgan paces, drawing the dress through her fingers.

QUEEN MORGAN (CONT’D)
Sir Launcelot and Sir Gawaine-- and
King Arthur-- were the only knights
ever to best him in single combat.
Accolon was big and strong, yet as
a lover he was as tender as any
virgin maid could ever wish. His
intellect rivaled mine, as did his
eagerness to help right the wrongs
Arthur inflicted upon me.

Queen Morgan presses dress over her heart and keeps pacing.

QUEEN MORGAN (CONT’D)
Accolon’s hair was as glossy-black
as a raven's wing, and he kept it
short-cropped in the old Roman style.
It had a most endearing curl. His
eyes were a fathomless shade of
blue...

She halts in front of her monitor, tuned to a video montage
of SANDY CARTER, 40s, a baseball player/scout/coach/manager.

QUEEN MORGAN (CONT’D)
Lord God and all His angels in
Heaven! Who is that? And if you say
Accolon, I shall blast you into
next week.

CLARICE
And make it stick. Yes, ma’am.
(facing monitor)
Alexander Leroy “Sandy” Carter,
second baseman and 2057 World
Series MVP for the Yankees. He
retired his glove in '65 and spent
the next several years as a Yankee
scout and coach. The Red Sox hired
him as a triple-A manager in '72.

QUEEN MORGAN
If this man is so valuable, why did
Ira Desmorel let him go, and to
none other than the Yankees’ most
ancient and hated of rivals? Or was
the move Mr. Carter’s idea?

Video clip shows Sandy getting into a dugout brawl with a
fellow YANKEE COACH. Clip rolls, showing more fights,
including boardrooms and bars, during dialog.

CLARICE
His points are valid. He just
doesn’t bother to curb his temper.

QUEEN MORGAN
So it was with Accolon...
(appreciative whistle)
Even today Alexander Carter has a--
how do you say it in this century?
Nice abs?

CLARICE
(grins)
Those, too.

QUEEN MORGAN
But he is not available.

CLARICE
For the right price, Queen Morgan,
anyone is.

Queen Morgan twitches her hand to don the sexy black dress.
She touches a computer key to open a chat window, and she
strikes a sultry pose. Connection opens to show Sandy in his
Boston Red Sox office.

QUEEN MORGAN
Me? Why, yes, Mr. Carter. Indeed
you may. In ever so many ways.
Contact Kim:
Website